For example, a simple MADS is the table shown in Figure 4.

Definition 14 A Complex MAD is a conceptual multidimensional aggregate data in which one or more dimensions is partitioned into two or more subsets, each of which is "classified by" different attributes. This situation can produce a union of subMADS, each of them with a possible different cardinality.

Analogously, a Complex MADS has the same definition, with the obvious difference of the ordered sets e and s.

In Figure 5 an example of this situation is shown. In this case the MADS has to be split into two (or more) different MADS. 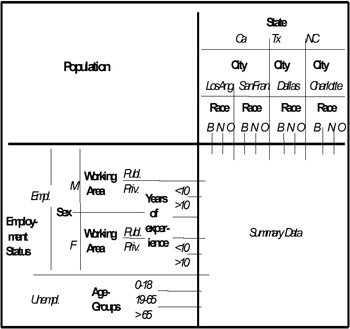 A subtle distinction has to be made between the concept of multidimensionality and that of polidimensionality. The former refers to a data structure in which measured data is described by different (two or more) parameters which define a multidimensional descriptive space. The latter refers to a descriptive space in which a category attribute has, for example, one part of its definition domain classified by one or more other category attributes, A, B, …C, while the other part is classified by one or more different category attributes, E, F, …H. Note that the number of the first and the second group of category attributes can be different. For example, with regard to the MADS of Figure 5, which is a typical example of polidimensional MADS, the category attribute "Employment Status" has its instance "Employed" classified by "Sex," "Working Area," and "Years of Experience," while the other instance "Unemployed" is classified by "Age Groups." This means that such a MADS will have one part with the three common dimensions "State-City," "Race," and "Employment Status" (this last with the only instance "Employed"), plus the three other dimensions "Sex," "Working Area," and "Years of Experience" (i.e., with cardinality = 6), while the other part has the above-mentioned three common dimensions (with the only instance "Unemployed" of the dimension "Employment Status"), plus the other dimension "Age Groups" (i.e., with cardinality = 4).

A MAD (or a MADS) may collect data from two or more aggregation processes (composite MAD or MADS). Then:

Definition 15 A composite MAD is a conceptual multidimensional aggregate data defined by the set {a1, a2,…, aS}, where each element aj is a complex (possibly simple) MADS, and in which different summary types generally appear.

Analogously, a composite MADS is a MADS defined by the ordered set {a1, a2,…, aS} as defined in the previous definition.

This means that this type of MAD (or MADS) is obtained by the union of two (or more) MAD (MADS) in which the fact described was the same, but the summary type was different. This union is performed only if a common dimension, along which such a union is made, exists.

For example, in Figure 6 an example of composite MADSs (represented by a table) is shown. Also in this case the MADS can be split into two (or more) MADSs, each of them with a unique summary type. Obviously, we can have the combination of the two situations, i.e., a complex-composite MADS, as shown in Figure 7. 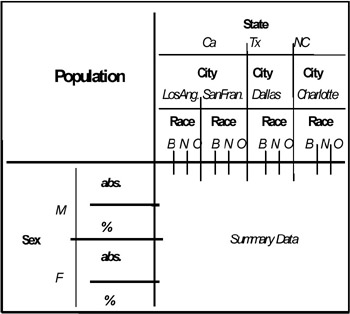 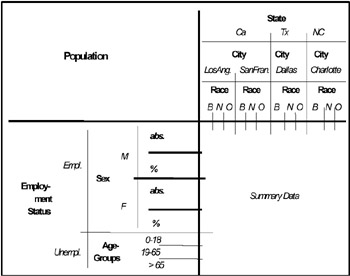 In Malvestuto (1993) two statistical objects are defined as being "homogeneous" if they refer to the same summary variable and to exactly the same population, i.e., if they have been obtained by applying the same aggregation function, and the collection of units of observation (microdata) involved is exactly the same. Malvestuto makes the assumptions that 1) the category attributes partition the population and that 2) the aggregation function is additive. He shows that, under these hypotheses, a collection of homogeneous statistical objects can be queried as if they were actually a single, higher dimensional object and that the set of answerable queries can be larger, compared to the one resulting from querying the single statistical objects separately. Moreover, important results on the answerability and evaluability of a query are obtained. Unfortunately, determining homogeneity is generally rather difficult, since there may be thousands of populations in an aggregate database, and each time we want to insert a new statistical object or query the database, we need to know the name of the population of interest or to carefully browse a long list of population names.