For CompTIA's RFID+ exam, you'll need to know what actions to take for troubleshooting, such as rebooting the machine, checking firmware versions, and inspecting cables. If you are interested in taking it a step further, you'll need to figure out a plan to do your own root-cause analysis. This section is going to walk you through a methodology for finding the problem with a faulty RFID network or system. (The section purposely does not spend much time on handheld readers because I've found that problems with handheld read rate and performance are going to be there when the handheld is initially deployed. If there is not an issue right from the start with a handheld, then it is likely to be a straight warranty issue that needs to be worked out with the manufacturer.) As you deploy these systems, there is no reason for you to hesitate to pick up the phone and call the hardware manufacturer. Many of the reader manufacturers, particularly the ones with well-established support networks such as Intermec, Zebra Technologies, Paxar, and Symbol Technologies, have a great support network of people to field calls relating to any issues with their products.

One of the country's largest producers of electronics equipment had installed over 250 readers in an east coast manufacturing facility. They had their conveyor vendor do the install and had read rates varying from 70% to 99.99%, but needed all readers to be consistent. When they hired us it was clear the conveyor company had only used a trial and error methodology for installation. Following ODIN's step by step troubleshooting protocol we were able to identify the primary issues and re-tune the readers to be providing greater than 99% read reliability.

Understanding the Steps to Isolate a Problem

Root-cause analysis begins with defining all the variables. This process will be specific to your problem, the hardware, the frequency under test, and the environment. For each particular problem, you should define a series of steps that will change one variable at a time to determine the effect on performance. Although this seems easy in theory, in practice it can be a lot more challenging.

The first step to isolate the problem is to effectively document the business process and record the entire system component by component, then test each one of those components one at a time. This is known as the variable isolation approach. It's tempting to overlook details in this part of the analysis. You may be tempted to put down something like the following:

when what really should be listed is this:

As you can see, taking what could have been described with 2–3 items and expanding it into 10 gives a lot more detail and provides more single, discreet points of investigation.

Using a Variable Isolation Approach to Fix the Problem

You've probably heard the old adage, "If it ain't broke, don't fix it." Well, the big question in RFID is to find out what is or isn't broken. The key is to isolate each single variable at a time; that's why you went to the trouble of identifying and defining all the key variables in the previous step. It doesn't do any good to take out the nonworking system and just replace it because you won't learn what caused the problem, and can't do anything to keep it from happening again. Look at every diagnosis as an opportunity to learn for a future deployment project.

Isolating each variable in the system may require test equipment that is very specific to RFID, such as a spectrum analyzer, a VSWR bridge, a network analyzer, and a signal generator. These tools can allow you to take out one component-such as a length of cable-and test it against other similar items from a reference model system.

It is critical to keep in mind that something as simple as removing a type of connector can reduce the loss enough to make a difference in read rates. With that in mind, methodically going through your list of system components one at a time is the only way to find the root cause of the problem.

RFID readers, particularly UHF in the United States, radiate a significant amount of energy from their antennas. This can help you read items that absorb a lot of energy, and help you read at long distances (up to 10 meters). Like everything with RFID, that performance comes at a price. The trade-off comes when you have multiple readers set up in close proximity to each other. Usually a key business process requirement is that an RFID reader reads only the items coming through the portal where the reader is mounted. So if you have 10 dock doors, each with a reader, you want the reader at dock door 1 reading only items that come through dock door 1, not reading items that come through dock doors 2 and 3. The problem that you face when a reader reads beyond the desired boundary is a problem of RF containment.

There are two simple ways to determine the proper RFID settings. One takes a while and is manual; the other is industry best practice and is automated.

The manual method entails taking an average-performing tag from your tag testing, placing it on a cardboard box with similar contents of your typical case, and setting the case on a tripod or stool the same height as the products that come through the dock door. This is your test case. Next you take a roll of tape or can of spray paint and mark out on the floor where you want your boundary of reads to be. Using the reader's demonstration software and the test case, move the case around the outside of that boundary marker on the floor and turn down the power level on the reader until you are unable to read the test case. After you've made it around the entire boundary layer, bring the case back to the middle of the interrogation zone with the power at the lowest setting used on the outside and make sure you can still read it effectively in the middle of the interrogation zone.

The second method uses a configuration and deployment tool called EasyReader. This tool is the industry best practice, and allows the user to take a portal probe (which acts like a virtual tag) and employ the software to tune the reader at the critical boundary. ODIN Technologies developed this software after hours and hours of using the manual method and found that the accuracy is increased while the time to configure properly is significantly decreased. The software allows the portal probe to give enough information back to automatically configure the reader. I'll talk about the software in greater detail in the sidebar on the next page.

Software to Keep You from Getting into Trouble, or to Get You out of Trouble

After deploying dozens of readers the "old-fashioned way" by using a spectrum analyzer to test power consistency, tapping out critical boundary layers, and attaching signal generators to the portal antennas, it was clear that the manual method would not scale to meet the needs of the industry. That's when ODIN Technologies began looking for an automated way of doing it. Originally, as with many software programs, we started trying to do one or two things automatically-record read success rate, measure performance from each antenna, and other time-consuming tasks. Pretty soon we had a group of products that could be put together to make up a software suite that would make the deployment of large, complex RFID networks more scalable, accurate, and faster. That's when EasyReader was created.

EasyReader provides a simple drag-and-drop interface that allows some of the more-complex and time-consuming tasks to be fully automated. Based on hundreds of deployments using EasyReader, we were able to reduce deployment time from six to eight hours per portal to less than 90 minutes. 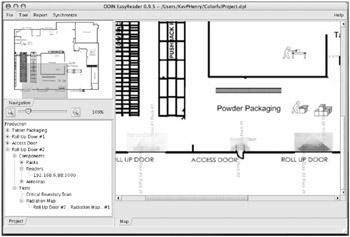 EasyReader can be used in the initial setup of an RFID network or can be used as a troubleshooting tool for a poorly functioning interrogation zone. The figure above shows what EasyReader looks like. The upper-left corner is the blueprint of the entire facility, or the engineering drawings; the lower-left corner is the individual component description (such as antenna or reader); and the large screen on the right is the workspace where you can drag and drop to add new portals, create bills of materials so you don't forget any components, and go through a detailed configuration and testing process. You should pay particular attention to the shaded areas around the various read points, this gives an actual look at the radiation containment. You can tell exactly where the RF energy propagates to. This patented technology is a huge help in initial deployments as well as troubleshooting.

The last step in any troubleshooting scenario is to document the steps you took and the results from the various tests. With EasyReader you can do this automatically, and the configurations and test results are stored for other people to review. This is particularly important if a problem arises again and you are not the one troubleshooting. A smart service technician is going to look back at the last trouble ticket or service documentation and see what the issue was. That's the place to start in investigating a problem with the same reader.

The last method of containing radiation is to use metallic or synthetic material to block radio waves from going outside a certain area. This is commonly referred to as shielding and can be done anywhere you want to try and block off direct RFI signals. The problem is that RF waves bounce up down and sideways and therefore can work around a single piece of shielding.