Let's suppose that we are modeling the results obtained by the sales of some products by a company. We are interested in analyzing the products sold, the date, the branch office, and the distribution channel used for the sale.

The next step is to detail the fact schemas. We must specify synthesis attributes, synthesis functions applied on them, and methods. In this case, we have two synthesis attributes (incomes and expenditures). The aggregation function in both cases is sum. Besides that, we have a method (benefits), defined by sum of incomes minus sum of expenditures. Figure 7 shows the resulting conceptual schema. 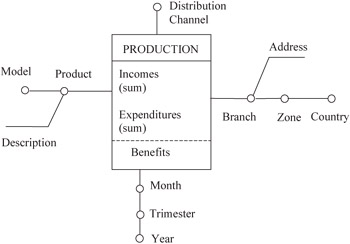 In DSI-MD, process transformation from conceptual into logical multidimensional or relational schema is carried out. In the relational case, the conceptual schema is translated into a star schema (Kimball, 1996; Kimball et al., 1998). Every dimension is transformed into a dimension table. Physical design should be done taking into account the characteristics of the specific relational product, such as bitmap indices, table partitions, materialized views, etc. 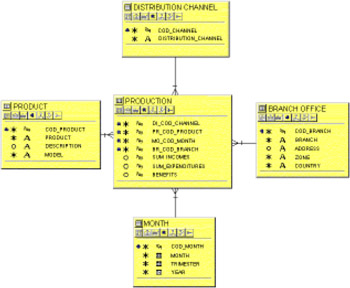 Because there is not any standard logical multidimensional model, transformation rules in this case have to be based on specific products. Next, we show a transformation into Oracle Express, one of the most used multi dimensional DBMS.