How can artwork be made into a game?

A Pulitzer Prize-Winning Play Based on a Painting

Sunday in the Park With George was inspired by the art of Georges Seurat’s painting entitled “A Sunday Afternoon on the Island of La Grande Jatte.”

Georges Seurat was the founder of the 19th-century French school of Neo-Impressionism whose technique for portraying the play of light using tiny brushstrokes of contrasting colors became known as “Pointillism.”

Director and book writer James Lapine collaborated with Stephen Sondheim on Sunday in the Park with George, the winner of the 1985 Pulitzer Prize for Drama based on Georges Seurat’s masterpiece. 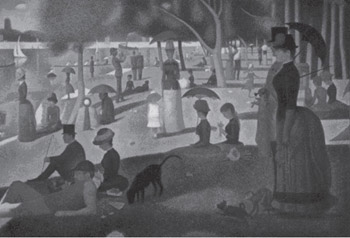