Though tools such as Office Word and Office Excel that were designed to create, edit, and review documents are important to a business, these applications clearly do not offer the capabilities to manage the entire document life cycle. Many documents in a business environment must go through one or more approval processes. Other documents need to be published or archived. Some companies must follow regulations that mandate their documents be kept on record for a certain length of time before disposal.

When the Microsoft Office team members first began to consider what features they wanted to include with WSS 3.0 and MOSS, they knew they could improve their support for managing the full document life cyle. In particular, they began to consider how to add automation support for the tasks required later in the document life cycle such as approval, publishing, archiving, and disposition. It became evident that they needed to add support for developing reactive programs and integrating them into WSS and MOSS to automate workflow-style tasks on documents and list items.

The teams building WSS 3.0 and MOSS benefited from having a platform supplying much of the necessary infrastructure for developing and managing WF programs. The WF team benefited from having a large number of developers from the Microsoft Office team kicking the tires of the WF runtime and development tools long before the WF was released to the outside world. This enabled them to find bugs and design flaws and fix them very early in the product life cycle so that the WF could be adapted to the needs of large-scale, Web-based applications running in a Web-farm environment.

When the Microsoft Office team began to integrate WF support into WSS and MOSS, their primary design goal was to attach business logic to documents and list items using WF programs. The WF and its ability to create reactive programs that run in episodes is exactly what is needed for capturing business processes to automate tasks throughout the entire document life cycle.

Another critical design goal was to add a human dimension of responsibility and accountability because, after all, many business processes are reliant on humans and their actions. Humans are required, for example, to provide input in the form of an approval, a signature, or feedback. The Microsoft Office team felt that it was important to add support so that WF programs could assign tasks to users who were responsible for driving (or holding up) the business processes being automated.

In addition to assigning tasks, the Microsoft Office team felt it was important for users and their organizations to have access to information about the status of a business process that was being automated by a workflow instance. They came up with the idea that each workflow instance should be able to log entries into a workflow history list that would keep users up to date on workflow status. For example, a user should be able to navigate to a special page within a WSS site that displays the status of a workflow instance, including the steps it has gone through and the tasks (if any) that have been assigned to it.

When the Microsoft Office team began integrating WF support into WSS, they knew that it was important for site owners and users to be able to administrate and run WF programs without involvement from the IT department. WSS had made many other aspects of administration within a site collection accessible to users, and it was essential for the Microsoft Office team to make the administration of WF programs equally accessible.

While the Microsoft Office team spent a good deal of energy making their workflow story accessible to users and information workers, they did not want to forget about developers and their need to build custom WF programs. It was important to the Microsoft Office team that they extend the WF in such a way that SharePoint developers could create SharePoint-targeted workflows by using Visual Studio and the WF workflow designer with the same levels of convenience and productivity as developers experience when building WF programs for standard WF components and applications.

The final design goal might have been the biggest one. The Microsoft Office team wanted to provide several valuable out-of-the-box WF programs to automate common business processes, such as document approval and signature collection. This design goal was aimed at providing value to customers who either could not or did not want to spend money on custom development. However, the vast majority of out-of-the-box workflows created by the Microsoft Office team are included with MOSS but not with WSS.

WF program and can optionally contain references to one or more input forms that solicit additional information from users. The types of input forms that can be included as part of a workflow template will be discussed in the next section, titled “Workflow Input Forms.”

Once the feature with a workflow template is activated within the current site collection, a privileged user, such as the site or list owner, creates a new workflow association on any list or document library. This can be done by clicking the Workflow settings link on the List Settings page to navigate to a standard application page named AddWrkfl.aspx that’s used to create a workflow association, as shown in Figure 8-4. Although the page title says “Add a Workflow,” you now know that it really means to add a workflow association. 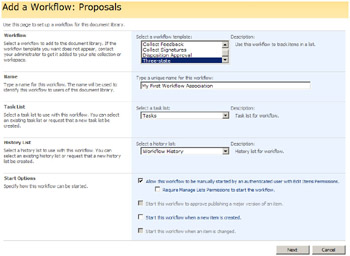 For example, if you navigate from the List Settings page to the Advanced Settings page for a list or document library, you can enable the option to allow management of content types. Once you do this, you can add additional content types to the list as well as drill down into the settings for a content type that has been added to the list and create a new workflow association. Therefore, you can configure a list so that different items within it have different available workflow associations depending on their content type. In summary, there are three different levels at which you can create a workflow summary:

WSS provides standard elements within the user interface to give users the ability to initiate and manage workflow instances as well as to see their status. The workflow menu item shown in Figure 8-5 appears in the standard ECB menu for list items and documents. The workflow menu item provides users with the ability to navigate to an application page named workflow.aspx that allows a user to see, initiate, and manage workflow instances for a specific list item or document. 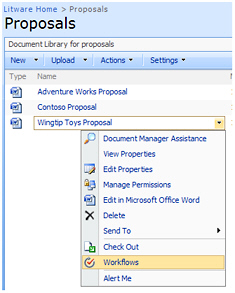 Figure 8-5: A workflow association can be configured to allow users to launch workflow instances manually. 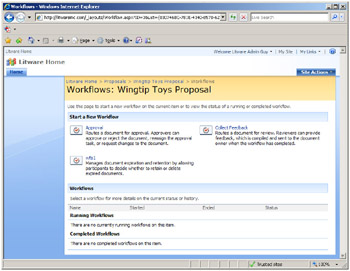 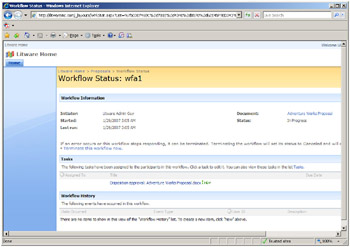 Figure 8-7: The Workflow Status page provides information on the status of one specific workflow instance.

One advantage to creating a custom content type for workflow tasks is that you can add extra fields beyond those defined in the standard WorkflowTask content type. A second advantage is that you can create a custom Task Edit Form. This allows you to take over the user experience when a user needs to edit a task. For example, you can supply a task edit form containing only the necessary controls, such as an Approve and Reject button.