The game runs fine now and if you got through the final testing it is ready to be released. But even after that you might not have enough of it and you still might want to try additional ideas or think about future extensions. I often find myself reusing one of my existing engines just to test out new game ideas. It is just so much easier to use an existing engine you are already familiar with than to start from scratch.

Having more car models was one of my earlier wishes, but since I’m not a modeler and none of the modelers I know have much time and think it is “fun” to create a couple more car models for my little racing game, I never got beyond the initial 3D car model that was made specifically for the racing game. It was relatively easy to change the appearance of the car by changing the texture a bit and the starter kit version features three different car textures and some code to recolor the cars dynamically, but they all use the same underlying geometry.

The Speedy Racer Game mod, which is shown at the end of this chapter, will also feature another car model (just a free one from the Internet), but having even more different car types would be fun, especially if you give each car different speeds, acceleration, and braking parameters. For a multiplayer game it would also be more fun to have different cars so every player can choose his favorite car type.

But I guess having as many cars as the commercial racing games you saw in Chapter 12 will cost a lot of money to develop and it also takes a lot of time to get them as good as they are done in those games. Hopefully the community will find ways to import new car models, and after a while when there are more game modifications available enough cars can be found to make even better game modifications.

The car rendering code for the racing game is pretty specific; for example, the Model class uses a customized render method called RenderCar just for rendering the car. If you have more than one car model it would be harder to keep this method up to date and it would probably make more sense to implement the cars with the normal Render method.

Implementing a call to a web service and getting the top 10 online highscores from there is probably not a big problem. You would add such code in the Highscore class and you could even reuse most of the existing code from the Rocket Commander game.

Before you can use web services you will have to add the System.Web.Services assembly to your references list, which is only available on the Windows platform. All the web services code you are going to add to the Highscore class must be disabled on the Xbox 360 platform.

In order for this code to work you need a web service running at the specified location of the RacingGameService class. Writing the web service itself is rather trivial, but implementing a nice looking website that shows all this data to the visitors is quite a bit of work. Maybe this will be done in the future.

Having more shaders and effects in a game today is always a good thing, at least from the player’s perspective because games look cooler and more different than a few years ago when many games used similar rendering techniques and looked at least in that regard similar.

One thing you could plug in quite easily would be the parallax mapping shader from the Rocket Commander game, but you would also need a height map on all materials where you want to use the parallax shader instead of the standard normal mapping shader.

But adding effects and an effect manager system like for the XNA Shooter game would also be nice (see Figure 14-19). You currently have no effect at all, not even for a car explosion or crashing into something. 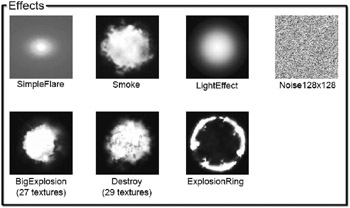 For more examples of some good post-screen shaders go back to Chapter 8. A racing game would greatly benefit from HDR rendering, especially if you change the lighting situations and drive through tunnels (as you actually do in the game).

The per pixel motion blur effect discussed in Chapter 8 would also be a lot better than the currently implemented whole screen post-processing effect, but it is obviously also a lot harder to implement.

The major thing I would always improve for a racing game mod is to change the color correction factors in the PostScreenMenu and PostScreenGlow shader classes and the underlying shader code. It will give the whole game a completely different experience without having to change all of the textures yourself.

More game modes would also be fun. I’m not really a racing game expert, but maybe it would be fun to implement one or more of the common racing game modes you can often find in commercial racing games:

For most game modes just discussed it would be a lot more fun if you could play the game together with a couple of friends either in your local area network (LAN) or over the Internet. Because networking code is not possible on the Xbox 360, the multiplayer part would only work on the PC right now with XNA.

The main change you would have to do to the game after implementing the basic code for networking is to change the Player class and allow multiple instances of this class. You will also need to handle a list of players and update all the data for each player with help of multiplayer messages. Again, this alone could fill up a book because there are many issues with multiplayer games and many possible ways to implement such code.

As a little example, take a look at Figure 14-20, which shows a couple of such multiplayer network classes working together. The game class holds a list of player objects. Each player receives data from all the other players and adds all received messages to an internal list. Messages are loaded with the help of the Message class and the MessageType enum.