Setting Up an NFS File Server

Instead of representing storage devices as drive letters (A, B, C, and so on), as they are in Microsoft operating systems, Fedora and Red Hat Linux systems connect file systems from multiple hard disks, floppy disks, CD-ROMs, and other local devices invisibly to form a single Linux file system. The Network File System (NFS) facility lets you extend your Linux file system in the same way, to connect file systems on other computers to your local directory structure as well.

Creating an NFS file server is an easy way to share large amounts of data among the users and computers in an organization. An administrator of a Linux system that is configured to share its file systems using NFS has to perform the following tasks to set up NFS:

Figure 18-1 illustrates a Linux file server using NFS to share (export) a file system and a client computer mounting the file system to make it available to its local users. 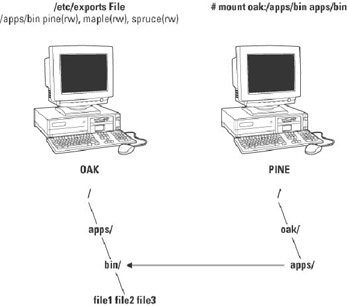 In this example, a computer named oak makes its /apps/bin directory available to clients on the network (pine, maple, and spruce) by adding an entry to the /etc/exports file. The client computer (pine) sees that the resource is available, then mounts the resource on its local file system at the mount point /oak/apps. At this point, any files, directories, or subdirectories from /apps/bin on oak are available to users on pine (given proper permissions).

Although it is often used as a file server (or other type of server), Linux is a general-purpose operating system. So, any Fedora or Red Hat Linux system can share file systems (export) as a server or use another computer’s file systems (mount) as a client. Contrast this with dedicated file servers, such as NetWare, which can only share files with client computers (such as Windows workstations) and will never act as a client.

To share an NFS file system from your Linux system, you need to export it from the server system. Exporting is done in Fedora and Red Hat Linux by adding entries into the /etc/exports file. Each entry identifies the directory in your local file system that you want to share with other computers. The entry identifies the other computers that can share the resource (or opens it to all computers) and includes other options that reflect permissions associated with the directory.

To share a directory with the NFS Server Configuration window, do the following:

The next few sections describe the /etc/exports file you just created. At this point, a client can only use your shared directory if he mounts it on his local file system. Refer to the "Using NFS file systems" section later in this chapter.

The following text describes those entries:

Of course, you can share any directories that you choose (these were just examples), including the entire file system (/). There are security implications of sharing the whole file system or sensitive parts of it (such as /etc). Security options that you can add to your /etc/exports file are described throughout the sections that follow.

The format of the /etc/exports file is:

Directory is the name of the directory that you want to share. Host indicates the host computer that the sharing of this directory is restricted to. Options can include a variety of options to define the security measures attached to the shared directory for the host. (You can repeat Host/Option pairs.) Comments are any optional comments you want to add (following the # sign).

You can indicate in the/etc/exports file which host computers can have access to your shared directory. Be sure to have a space between each host name. Here are ways to identify hosts:

You don’t have to just give away your files and directories when you export a directory with NFS. In the options part of each entry in /etc/exports, you can add options that allow or limit access by setting read/write permission. These options, which are passed to NFS, are as follows:

Besides options that define how permissions are handled generally, you can also use options to set the permissions that specific users have to NFS shared file systems.

One method that simplifies this process is to have each user with multiple user accounts have the same user name and UID on each machine. This makes it easier to map users so that they have the same permission on a mounted file system as they do on files stored on their local hard disk. If that method is not convenient, user IDs can be mapped in many other ways. Here are some methods of setting user permissions and the /etc/exports option that you use for each method:

Here’s an example of the exportfs command:

The -a option indicates that all directories listed in /etc/exports should be exported. The -v option says to print verbose output. In this example, the /pub and /home directories from the local server are immediately available for mounting by those client computers that are named (maple and spruce). The /mnt/win directory is available to all client computers.

For security purposes, the NFS service is turned off by default on your Fedora system. You can use the chkconfig command to turn on the NFS service so that your files are exported and the nfsd daemons are running when your system boots.

There are two start-up scripts you want to turn on for the NFS service to work properly. The nfs service exports file systems (from /etc/exports) and starts the nfsd daemon that listens for service requests. The nfslock service starts the lockd daemon, which helps allow file locking to prevent multiple simultaneous use of critical files over the network.

You can use the chkconfig command to turn on the nfs service by typing the following commands (as root user):

The next time you start your computer, the NFS service will start automatically and your exported directories will be available. If you want to start the service immediately, without waiting for a reboot, you can type the following:

The NFS service should now be running and ready to share directories with other computers on your network.

After a server exports a directory over the network using NFS, a client computer connects that directory to its own file system using the mount command. The mount command is the same one used to mount file systems from local hard disks, CDs, and floppies. Only the options to give to mount are slightly different.

To ensure that the mount occurred, type mount. This command lists all mounted disks and NFS file systems. Here is an example of the mount command and its output:

What I just showed is a simple case of using mount with NFS. The mount is temporary and is not remounted when you reboot your computer. You can also add options to the mount command line for NFS mounts:

The next section describes how to make the mount more permanent (using the /etc/fstab file) and how to select various options for NFS mounts.

The format for adding an NFS file system to your local system is the following:

The first item (host:directory) identifies the NFS server computer and shared directory. mountpoint is the local mount point on which the NFS directory is mounted, followed bythe file system type (nfs). Any options related to the mount appear next in a comma-separated list. (The last two zeros just tell Fedora not to dump the contents of the file system and not to run fsck on the file system.)

The following are two examples of NFS entries in /etc/fstab:

In the first example, the remote directory /tmp from the computer named maple (maple:/tmp) is mounted on the local directory /mnt/maple (the local directory must already exist). The file system type is nfs, and read (rsize) and write (wsize) buffer sizes are set at 8192 to speed data transfer associated with this connection. In the second example, the remote directory is /apps on the computer named oak. It is set up as an NFS file system (nfs) that can be mounted on the /oak/apps directory locally. This file system is not mounted automatically (noauto), however, and can be mounted only as read only (ro) using the mount command after the system is already running.

In your /etc/fstab file are devices for other file systems that are not mounted automatically (probably /dev/cdrom and /dev/fd0, for your CD-ROM and floppy disk devices, respectively). A noauto file system can be mounted manually. The advantage is that when you type the mount command, you can type less information and have the rest filled in by the contents of the /etc/fstab file. So, for example, you could type:

With this command, mount knows to check the /etc/fstab file to get the file system to mount (oak:/apps), the file system type (nfs), and the options to use with the mount (in this case ro for read-only). Instead of typing the local mount point (/oak/apps), you could have typed the remote file system name (oak:/apps) instead, and had other information filled in.

You can add several mount options to the /etc/fstab file (or to a mount command line itself) to impact how the file system is mounted. When you add options to /etc/fstab, they must be separated by commas. The following are some options that are valuable for mounting NFS file systems:

Any of the values that don’t require a value can have no prepended to it to have the opposite effect. For example, nobg indicates that the mount should not be done in the background.

With the autofs facility configured and turned on, you can cause any NFS shared directories to mount on demand. If you know the host name and directory being shared by another host computer, you can simply change (cd) to the autofs mount directory (/net by default) and have the shared resource automatically mount and be accessible to you.

The following steps explain how to turn on the autofs facility:

Believe it or not, that’s all you have to do. Provided that you have a network connection to the NFS servers from which you want to share directories, you can try to access a shared NFS directory. For example, if you know that the /usr/local/share directory is being shared from the computer on your network named shuttle, do the following:

After an NFS file system is mounted, unmounting it is simple. You use the umount command with either the local mount point or the remote file system name. For example, here are two ways you could unmount maple:/tmp from the local directory /mnt/maple.

If you get the message device is busy when you try to unmount a file system, it means the unmount fails because the file system is being accessed. Most likely, one of the directories in the NFS file system is the current directory for your shell (or the shell of someone else on your system). The other possibility is that a command is holding a file open in the NFS file system (such as a text editor). Check your Terminal windows and other shells, and cd out of the directory if you are in it, or just close the Terminal windows.

If an NFS file system won’t unmount, you can force unmount it (umount -f /mnt/maple) or unmount and clean up later (umount -l /mnt/maple). The -l option is usually the better choice, because a force unmount can disrupt a file modification that is in progress.

Other cool things to do with NFS

You can share some directories to make it consistent for a user to work from any of several different Linux computers on your network. Some examples of useful directories to share are:

If you are working exclusively with Fedora, Red Hat Linux, and other UNIX systems, NFS is probably your best choice for sharing file systems. If your network consists primarily of Microsoft Windows computers or a combination of systems, you may want to look into using Samba for file sharing.