There are several areas in DotNetNuke that use the Provider Model:

The first implementation of the Provider Model in DotNetNuke was the Data Provider. DotNetNuke originally supported only Microsoft SQL Server. The core of the portal was tightly coupled with the data tier. There were many requests from the community to extend DotNetNuke to support other data stores. We needed a way to support a diverse array of data stores while maintaining a simple Data Access Layer and allowing for extensibility. That's when the concept of the Provider Model was first introduced into DotNetNuke. 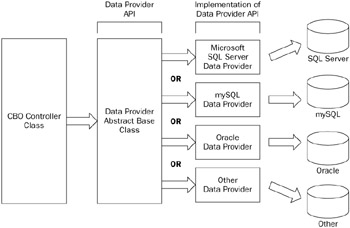 The Provider Model has brought great value to DotNetNuke in the way that it allows for functionality to be replaced without modifying the core code. In DotNetNuke, as in most open-source applications, the core code should not be modified by its consumers if at all possible. The Provider Model helps enforce this fundamental standard of open-source application development. It also provides a new level of abstraction between the Data Access Layer and the data store.