In late February 2003, the lack of sleep, family priorities, and community demands finally came to a head and I decided that I should reach out for help. I contacted a former employer and mentor, Kent Alstad, with my dilemma and we spent a few lengthy telephone calls brainstorming possible outcomes. However, my personal stress level at the time and my urgency to change direction on the project ultimately caused me to move too fast and with more aggression than I should have. I announced that the IBuySpy Workshop would immediately become a subscription service where developers would need to pay a monthly fee to get access to the latest source code. From a personal perspective, the intent was to generate enough revenue that I could leave my day job and focus my full energy on the management of the open source project. And with 2000 registered users, a subscription service seemed like a viable model (see Figure 1-5). 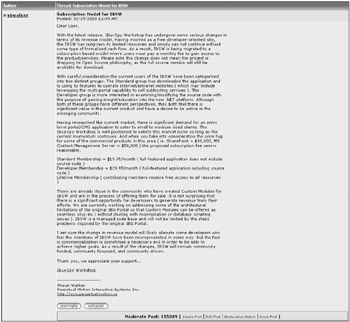 However, the true philosophy of the open source model immediately came to light, and I had to face the wrath of a scorned community. Among other things, I was accused of misleading the community, lying about the open source nature of the project, and letting my personal greed cloud my vision. For every one supporter of my decision, there were 10 more who publicly crucified me as the evil incarnate. Luckily for me, Kent had a trusted work associate named Andy Baron, a senior consultant at MCW Technologies and a Microsoft Most Valuable Professional since 1995, who has incredible wisdom when it comes to the Microsoft development community. Andy helped me craft a public apology message (see Figure 1-6) that managed to appease the community and restore the IBuySpy Workshop to full open source status.