Before DotNetNuke began using Member Role, it had its own data schema and services to handle membership. Because of this, when it came time to implement Member Role, there were some challenges ahead.

Among the challenges was that DotNetNuke supports running many portals from a single DotNetNuke installation. Each portal has its own users and roles that are not shared with any other portals. A portal is identified by a unique key, the PortalID. Because the default Membership/Roles Provider implementation is a generic solution, it does not natively support the concept of having multiple portals, each with their own users and roles. The default Membership/Roles Provider implementation was designed in a way that only supports a single portal site in a DotNetNuke installation. The Membership/Roles Provider refers to the DotNetNuke installation as an "application," and without customization, that application can only support a single set of users and roles (a single portal instance).

Data Model for Users and Roles 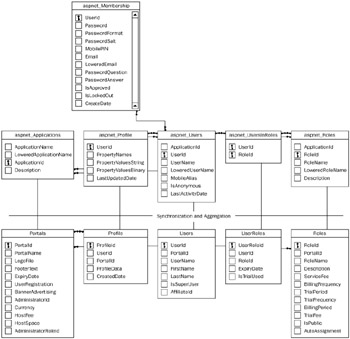 Because the data for portals, profiles, users, and roles is stored in multiple unrelated tables, the business layer is responsible for aggregating the data. For instance, you cannot get a complete representation of a user without collecting data from both the aspnet_Users table (from the Membership/Roles Provider) and the Users table (native DotNetNuke table).

Understanding the limitations DotNetNuke had to conquer and how all three of the providers were affected is important to comprehending why the current solution works the way it does. After the original implementation of Member Role in the first official DotNetNuke 3.x release, the DotNetNuke Core Team found its implementation of Member Role to be less extensible than it could be. To overcome the restrictions that DotNetNuke imposed on itself, the Membership, Roles, and Profile providers have been abstracted out even further. In doing this, a new set of three concrete AspNet Providers was created. They are the revised versions of the original Member Role implementation and can be found in $AppRoot\Library\Providers\MembershipProviders\CoreProvider\DataProviders\AspNetMembershipProvider.

Because Member Role is the current default provider set, the schema shown in Figure 9-1 is still relevant today. When creating this new set of concrete providers, extreme caution was taken to make sure the new implementation would not alter the previous one, therefore minimizing upgrade implications.

As with the previous Member Role implementation, the new AspNet set of providers, which are still technically a Member Role implementation, follows the Provider Model design pattern discussed in Chapter 7. Keep in mind that it is possible to create a custom concrete profile provider of your own and still use the AspNet membership and AspNet roles concrete providers. This is important because it can greatly reduce the amount of effort for your next DotNetNuke project if only one of these concrete providers does not meet your requirements.