Adding Connectors to Your Diagrams

As you know, there are numerous Visio 2007 drawings, and almost limitless ways to connect shapes. Most drawings have their own unique visual language, and you'll find a multitude of connectors and connector behaviors in Visio 2007 to accommodate that visual language. Visio 2007 even includes an entire stencil that contains nothing but connectors.

At first glance, connectors might seem complicated because of the large variety, but in reality they are usually nothing more than a line that attaches to one shape at one end and another shape at the other end. For example, in a flowchart, the connector is the line from a process shape to a decision shape, as Figure 3-1 shows. In a network diagram, the connector is the line that connects a printer to a hub. On the flowchart, the line represents the order in which you do things. In the network diagram, the line represents an actual network connection. In all cases, the connection tells us something important about the relationship between two shapes. In some drawings, such as database and software model diagrams in Visio Professional, connectors actually trigger the transfer of data between the shapes they are connected to. 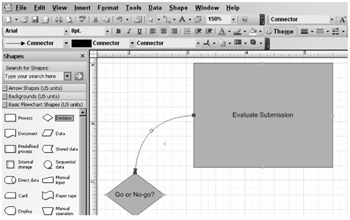 Figure 3-1: Connectors provide additional flexibility in a diagram that lines created with the Line tool don't.

Using Connectors and the Connector Tool

In Visio 2007, the terms connector and 1-D shape are almost synonymous. Whatever term you use, connectors exist so that you can attach lines to 2-D shapes in Visio 2007. To put it simply, a connection happens when you drag an endpoint of a 1-D shape into a connection point of a 2-D shape. The two ends of a connector aren't interchangeable- as with any line, there's a beginning and an end, and Visio stores information about which is which, in essence giving the line directionality.

Both 1-D and 2-D shapes provide visual cues that show you where connections can be made (before you connect) and what type of connections have been made (after you connect). On a 2-D shape, each point at which a connection can be made is marked with a connection point, the blue x. On a 1-D shape, the ends are marked with square endpoints, as Figure 3-2 shows. The begin point of a 1-D shape has an x symbol inside the square. The end point has a + symbol inside the square. Either endpoint can be attached to any connection point on a 2-D shape. 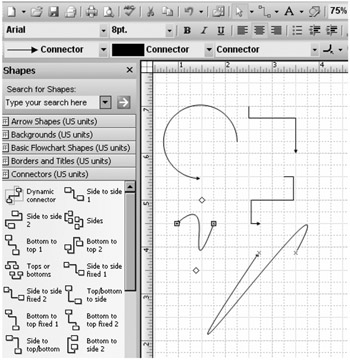 Figure 3-2: The endpoints on connectors are designed to connect to the connection points on 2-D shapes.

The only shapes that have begin and end points are connectors and other types of 1-D shapes. The begin and end points provide visual feedback that a connection has been established, but they also indicate direction. Think of it this way: If your connector had an arrowhead on it, which way would it point, and why? When you add connectors to a drawing, connect or draw them so that they match the order of your shapes-attach the begin point to the first shape, and attach the end point to the next shape.

Using the Connector Shapes on Stencils

When you start a drawing with a template, Visio 2007 opens stencils containing the appropriate shapes and connectors for the drawing type. Many of the basic connector shapes-such as the Dynamic Connector and Line-Curve Connector shapes shown in the stencil in Figure 3-3-appear on many stencils to make them easy to find. You can use these shapes in any Visio 2007 drawing. Other stencils contain specialized connectors with advanced features and behaviors that support a specific drawing type. 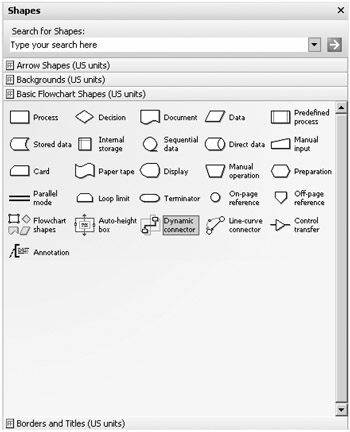 Figure 3-3: Visio includes the Dynamic Connector and Line-Curve Connector master shapes on many stencils, because they work in any drawing type to connect shapes.

Follow these steps to use any connector shape on a stencil:

Drawing Connectors with the Connector Tool

The Connector Tool is similar to the Drawing Tool in that you are able to "draw" your own connector. However, the connections you draw are smarter than lines drawn with a pencil. Depending on how you position the tool as you drag, you can connect to a specific connection point on the shape or to the whole shape to create a dynamic connector- the same as the dynamic connector shape on a stencil. The difference in how you draw with the Connector tool affects the way you work with shapes afterward, as follows:

When you release the mouse, Visio 2007 displays red handles to show that the shapes are connected. The handles differ in appearance depending on the type of connection, as Figure 3-4 shows. 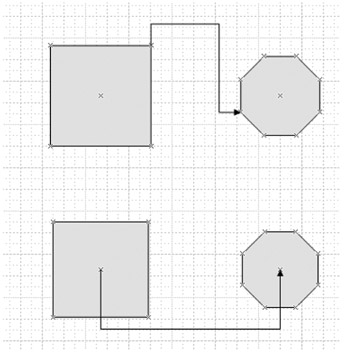 Follow these steps to use the Connector tool to draw a different connector type:

Changing the Type of Connection