These are a few of the methods used to detect rootkits:

Unfortunately, the vast number of files and directories required to run a modern operating system make file hiding unnecessary. Rootkit authors have at their disposal many techniques to load rootkits from many locations. With so many files, directories, registry keys, and loading techniques, and the ability to obfuscate using system service naming conventions, there is no real need to hide files, especially now that file-hiding detectors are freely available everywhere; so don’t expect to find any of the newer rootkits with file-hiding detectors.

Unfortunately, as with files, there are simply too many places in the registry to hide. Some obfuscation may be required (I wouldn’t put the location of a device driver under HKLM\Software\MyRootkit) but the proliferation of registry hiding detectors has greatly curtailed the use of registry key hiding techniques in modern rootkits; so again, don’t expect to find any of the newer rootkits with registry key hiding detectors.

Unfortunately, some forms of process hiding can remain undetected, and many rootkits do not employ services, so these forms of rootkit detection will not uncover a growing number of modern rootkits.

The use of alternate data streams does not by itself guarantee the presence of a rootkit, but there are logical and statistical associations between rootkits and ADS. This makes ADS detection of questionable value by itself, but the indication of a possible rootkit is likely to spawn an investigation that will eventually reveal the reason for the use of ADS.

Unfortunately, ADS detectors currently only test for data streams linked to file objects, leaving other forms of ADS linking open. In addition, any investigation into the use of an ADS can be thwarted by simple encryption or the addition of thousands of small alternate data streams throughout the operating system.

Unfortunately, as shown in Chapter 4, hooking can be placed in the kernel functions themselves using a trampoline hooking technique instead of modifying the kernel system call table. Furthermore, a growing number of applications hook the system call table for viable reasons. Determining which hooks are needed and which hooks should be removed can be a difficult task.

Kernel function (trampoline) hooking can be detected by searching for unexpected jumps at or near the beginning of kernel functions. This method requires the rootkit detector to first rebuild the system call table and then follow each call, checking for immediate, unconditional jumps. The kernel functions in memory can also be compared to the code on disk, provided relocateable addresses are skipped.

Unfortunately, trampoline jumps don’t have to be immediate or unconditional, and there is nothing to prevent a rootkit from modifying the kernel image, ntoskrnl.exe, seen by calling processes. There are too many operating system versions, too many service packs, and too many patches to easily detect image tampering, although, just like file, registry, process, and system call table tampering, image tampering will one day become a viable rootkit detection technique.

Using a gated interrupt to perform system operations can bypass the hooks inserted by some rootkits. This is a great way to detect user mode hooking, as Windows NT functions are completely bypassed using the 2E interrupt. File lists, directory lists, registry keys, and registry values can all be scanned with and without the use of Windows NT functions. Because both methods call the same kernel functions, there should be no difference between the two scanning techniques. Any discrepancy would tend to indicate the presence of a rootkit.

Unfortunately, user mode hooking can be conditional based upon the name of the process loading the image, purposely not hooking known detectors while hooking everything else. This avoidance technique can easily leave a false sense of security. In addition, user mode hooking of Windows NT functions rarely covers all possible rootkit concealment requirements. This creates a compelling reason for rootkits to use some other concealment technique.

Comparing the process blocks passed through SwapContext to the process blocks in the doubly linked process list can detect the type of process hiding used in this book. SwapContext is called whenever an old process is swapped out and a new process is swapped in. Following the KTHREAD of the swapped-in process (located in the EDI register) will lead to the EPROCESS block for the new process. That process block should also be somewhere in the doubly linked process list. Any discrepancy here is most definitely a rootkit. Figure 13-1 shows the SwapContext Process Hiding Detection. 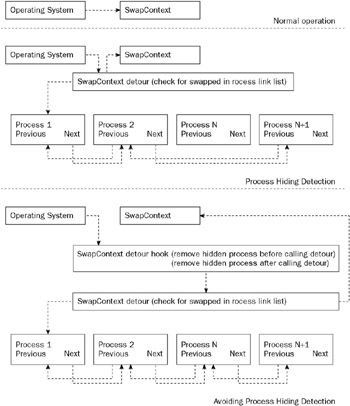 Scanning kernel memory can also be used to detect known rootkits. This is a complicated task, requiring the scanner to either switch to the context of the process being scanned or perform virtual-to-physical address translations. Once accomplished, however, existing rootkits can be detected by comparing scanned memory to known rootkit signatures.

Unfortunately, memory scanning will not detect newer rootkits; and without a means to circumvent process hiding, memory scanning might not even detect known rootkits with established signatures.

By now, you’ve probably noticed the pattern here: a paragraph defining a rootkit detection technique, followed by a paragraph detailing ways to avoid detection by that technique. This list has grown considerably in recent years, but the format has not. For every new detection technique, there is (or will soon be) a corresponding avoidance technique. This progressive evolution of rootkit and anti-rootkit technology is expected to continue indefinitely.

One by-product of this struggle for dominance is that rootkits will become old faster. By “old” I mean “easily detectable by readily available anti-rootkit software.” This is not to say there will ever be a signature-based rootkit prevention system like those employed to prevent viruses, but a detector-based rootkit prevention system is probable. Like Professional Rootkits, Professional Rootkit Detectors, created by teams of professionals, will dominate the anti-rootkit market in the near future. This will ensure that new rootkit hiding techniques will be countered quickly and that the developed detectors will be distributed immediately to a vast demographic.