As mentioned, a defense- in-depth architecture protects a storage network's critical data. However, a layered security model can be subverted if simple best practices are not followed when designing storage security. For example, consider the home security example. The homeowner had spent several thousand dollars buying locks and security systems for her home. However, a simple best practice, such as not locking the house garage door, could negate all the other strong security measures that she had placed in the home.

Simple best practices in storage security can help prevent many of the common security attacks that unauthorized users will attempt. Adhering to the majority of these best practices can leave an attacker frustrated or bored and motivate him to move to another target or stop the attack altogether.

Using strong passwords and changing default passwords on storage devices is good security practice. Whether it is an EMC Cellera, a Network Appliance filter, or a Brocade switch, basic and simple passwords can be easily obtained and guessed. In addition, because most storage appliances have some sort of web management capability that is enabled by default, accessing the storage appliance and guessing passwords is not difficult for an accomplished attacker. Several tools exist to brute-force web-based authentication forms that can attempt more than 100 passwords in only a few minutes.

Using weak passwords can also significantly cripple storage security. While many organizations change weak passwords from prom or password to admin or manage , both admin and manage are common passwords that are contained in most tools that attackers use to crack accounts.

Most often, an attacker will complete a successful attack not because of some elite security problem that she has discovered on the spot, but rather because of poor configuration decisions and/or configuration errors that lead to wide open and unprotected devices. For example, a minor configuration error, such as a storage administrator allocating the incorrect LUN to a given WWN, can expose data that is not authorized. A major configuration error, such as a storage appliance backing up an entire file system with world-readable access permissions, can also expose all data to unauthorized users. Both have a significant impact on the security posture of the storage network, despite one being major and one being minor.

Management is a critical component to storage security architecture. Since functional storage networks rely heavily on storage management practices, it is imperative that a strong management environment exist. Because storage network management contains a significant amount of control, a compromise of any management entity would give an attacker a considerable amount of privileges.

Many storage devices and applications rely on unsafe and clear-text protocols (such as Telnet, SNMP, FTP, CIFS, or NFS) to communicate both data and management commands to and from storage devices. Support for encrypted data channels, such as SSH, have not been adopted universally . Issues also exist with the networking devices that are used to support the storage environment. These devices are subject to attack and may be managed in unsafe ways.

In addition to using unsecure protocols, many organizations make a common mistake by plugging their management interfaces on storage devices, such as switches and storage appliances, into the internal corporate network. Connecting the management interface of a storage appliance into the internal LAN potentially gives any internal employee, external VPN user , third-party business partner, or external onsite contractor/ consultant the ability to connect to the device and attempt to log in. In addition, if the management methods use clear-text technology, such as Telnet or web browsers (HTTP), the exposure is amplified. Table 25-2 lists a set of best practices for storage security.

It is important to know and understand which storage devices can perform what network actions without any user interaction. The following questions should be asked when using any kind of device that uses remote connectivity:

Operating system security is a best practice that is often ignored in storage networks. An operating system can act as a gateway into the storage network since it is connected to the internal LAN and to the back-end SAN. However, little concentration of security is placed on these systems-it's similar to having a firewall that connects the outside, untrusted Internet with the internal corporate network with a rule that allows any IP address to access any IP address. 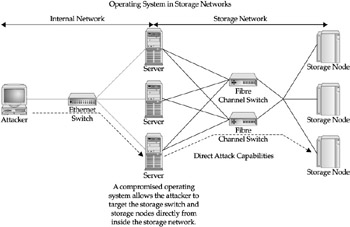 Storage devices such as Network Appliance (NetApp) and EMC devices contain a significant amount of system services that are not all storage related . For example, most storage vendors support storage protocols such as CIFS and NFS. However, in addition to running CIFS or NFS services, it would not be unusual to see FTP (File Transfer Protocol), Telnet, Simple Network Management Protocol (SNMP), mount, portmapper , Domain Name System (DNS), HTTP, NetBIOS, RSH, syslog, and others running on these storage devices.

Similar to an operating system with default installations, storage devices can be unsecure in the default state. As a best practice, storage devices, such as filers, data movers, and NAS heads, should be deployed with a minimal amount of services and with unnecessary default modules disabled. This process not only secures the storage device, but it also allows the core service of the system, such as the storage protocol, to run as the sole module. A minimalist approach to storage devices leaves less room for error and less possibility of security exposure. An accidentally enabled SNMP daemon could leave the storage appliance vulnerable to information disclosure. Even a general SNMP vulnerability, which would affect all SNMP devices, would leave the storage node vulnerable to direct compromise from this single service enabled. In general, it is best practice to disable all storage device services except the required storage protocols and management protocols.