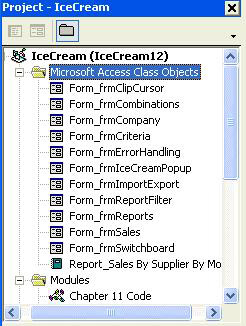 We create custom properties for forms and reports in just the same manner as we do for other classes. The easiest way to see this is to try it out for yourself - so let's do it! In the following example, we will create a Maximized property for the form frmSales and define what happens when the property is set.

The procedure creates a property called Maximized , which can be either True or False, and which is Public , that is, visible to all procedures.

IsZoomed() is simply an API function, a procedure in an external DLL. The DLL, User32 , contains procedures that handle interaction of Windows programs with user interfaces, and so is responsible for tasks such as window management.

The IsZoomed() procedure takes the handle of a window as an argument. It returns False if the window is not maximized and a non-zero value if it is maximized. A handle is simply a unique long integer identifier generated by Windows and used to allow it to keep track of individual windows and controls. We get the handle of the form's window by using the form's hWnd property. You probably won't come across this property very much, and when you do it will almost invariably be when you want to pass the handle to an API function.

To set the property we use the Property Let statement.

Again, we can see from the opening line of this procedure that the property's name is Maximized and that it has a Boolean datatype.

As for the rest of the procedure, it is fairly straightforward.

As you can see, creating custom form properties is just the same as creating properties for other class modules and is a fairly simple task once you have got your mind around the syntax of the Property Let and Property Get statements.

So, to create a Maximize method that increases the size of the form in the manner described above, simply type this code into the form module of frmSales :

Because this procedure has been made Public , it can be invoked from outside the form in the following manner:

and there you have a custom form method! Now that wasn't too hard, was it?

Now we'll move on to another feature that is exposed to us through the object-oriented nature of Access and VBA - the ability to create multiple instances of a single form. When you open a form, you are creating an instance of that form. The first instance is called the default instance . Most of the time, that is the only instance you will need, but there may be occasions when you want to have multiple instances of the same form open at the same time.

Typically, you will create multiple instances of forms when you want to view two records alongside each other. We will try that out now by creating a pop-up form to give details of the ingredients of ice creams that appear in the frmSales form.

Try It Out-Creating Multiple Instances of a Form

This is not as confusing as it might look at first glance. After creating the frmIcecreamPopup form, the first thing we have to do is to make sure that the new form has a class module. The reason for that is that we can only create instances of (as opposed to simply open) forms with a class module behind them. That is why we set the form's HasModule property to True . We also change the form's Popup property to True to ensure that the form will always remain topmost on the screen.

We then modify the pop-up form's RecordSource property to ensure that it will only display details of the selected ice cream.

Next, we add the code to the frmSales form to create a new instance of the pop-up form every time the ice cream combo box is double-clicked. Most of this code should seem straightforward. The only unusual line is the one in which we add the variable referring to the pop-up form to a collection declared at the form level.

In order to prolong the lifetime of the form instance, we add it to a collection that was declared at the form level (that is, in the Declarations section of the form module for frmSales ).

We can then add the form instance to the collection.

One thing to be careful of is that when you create multiple instances of a form, the syntax for referring to the form by name - forms("frmIceCreamPopup").SomeProperty is no longer valid since there are two instances of the form in memory. Trying to refer to a form opened multiple times using this syntax will result in a run-time error.

In fact you can "see" the form by using the syntax forms(Y) (if you know what Y is) but since the index Y changes as forms open and close you cannot reliably refer to forms using this syntax. In the example above we stored a pointer to the forms in our own collection. If you need to reference one of these instances, you will need to do so by going through that collection. In fact you could use the Key property of the collection to "name" the pointer to the form as you add it to the collection, for easy reference later: