A thread's scheduling priority and the processor's current IRQL determine whether a running thread can be preempted or interrupted. In thread preemption, the operating system replaces the running thread with another thread, usually of higher thread priority, on the same processor. The effect of preemption on an individual thread is to make the processor unavailable for a while. In thread interruption, the operating system forces the current thread to temporarily run code at a higher IRQL.

Thread Interruption on a Single-Processor System

Figure 15-1 shows a hypothetical example of thread interruption on a single-processor system. For the sake of simplicity, the example omits the thread scheduler, clock interrupts, and so forth. 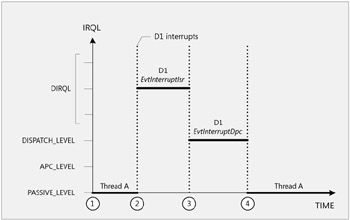 The figure shows how thread execution proceeds over time, as follows:

There is no guarantee that Thread A will exhaust its quantum. A thread can be interrupted or preempted any number of times during its quantum.

Thread Interruption on a Multiprocessor System

Figure 15-2 shows a hypothetical example of thread interruption on a multiprocessor system. This example omits clock interrupts and so forth, but it shows the system's thread scheduler. 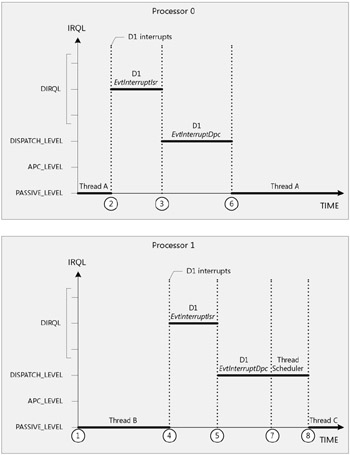 Errors related to IRQL are common and often result in a system crash with the IRQL_NOT_LESS_OR_EQUAL bug check code. KMDF performs some internal IRQL checking. In addition, the WDK includes several features that can help you to determine the IRQL at which driver code runs and to find IRQL-related problems. This section describes the following features:

Techniques for Finding the Current IRQL

You can get the IRQL at which a processor is currently operating in one of two ways:

A driver can call KeGetCurrentIrql to get the IRQL at which the current processor is operating. This function can be called at any IRQL. A driver can also determine whether it is operating in a critical region by calling KeAreApcsDisabled, which is available on Windows XP and later releases.

During debugging, you can use the !irql debugger extension command to get the IRQL at which a processor is operating. This command returns the IRQL at which the processor was operating immediately before the debugger became active. By default, the command returns the IRQL for the current processor, but you can also specify a processor number as a parameter. This command works on target systems that are running Windows Server 2003 and later versions of Windows.

The PAGED_CODE and PAGED_CODE_LOCKED macros can help you find IRQL problems that are related to page faults.

If the processor is running at or above DISPATCH_LEVEL when the PAGED_CODE macro is called, the system breaks into the debugger. By placing the macro at the beginning of each driver function that contains or calls pageable code, you can determine whether the function performs actions that are invalid at the IRQL at which it is called.

When used together with the static verification tools, the PAGED_CODE macro can help you find IRQL problems in code that subsequently raises IRQL. For example, if the processor is running at PASSIVE_LEVEL when the PAGED_CODE macro runs but the function later calls WdfSpinLockAcquire-which raises IRQL to DISPATCH_LEVEL-you receive a warning.

Tip  See "PAGED_CODE" in the WDK for more information-online at http://go.microsoft.com/fwlink/?LinkId=82722.

Some functions are pageable but must be locked into memory to run properly. By placing the PAGED_CODE_LOCKED macro at the beginning of such a function, you can ensure that the function is locked down upon entry. The macro causes the system to break into the debugger if the code that calls it is not locked into memory.

Tip  See "PAGED_CODE_LOCKED" in the WDK for more information-online at http://go.microsoft.com/fwlink/?LinkId=82723.