When building an application with multiple languages, you need to build a new project for each language, because a different .NET language compiler is involved with each language. The Solution Explorer makes dealing with multiple projects of different languages easy and keeps them all within the same solution. An advantage of having multiple projects that use different compilers within a solution is that the build process can be performed on all the projects at one time with just a single step.

Creating the Application and Component Projects

The first step in building a .NET application that utilizes multiple programming languages is to decide what the primary language will be for the application. This is the language that will ultimately produce the executable file. For this project, it makes sense to pick either C# or Visual Basic because both of those languages have better Windows Form support than Visual C++, and this application is a Windows Form application.

Because it is a toss-up between VB and C#, this application will use Visual Basic as the primary language. Use the File, New, Project menu item to create a Visual Basic Windows application named IntegratedApp, as shown in Figure 6.1. 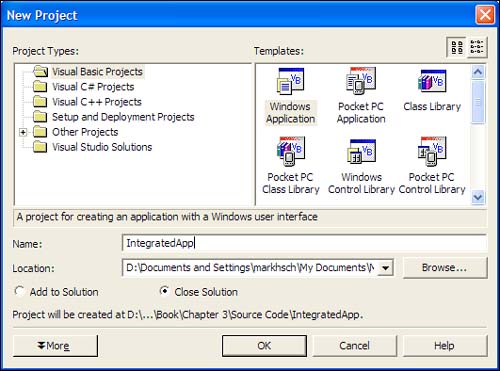 You should now have an empty Visual Basic .NET Windows application with a blank Windows Form in the Form Designer. The next step is to create the two components in C# and C++. From the Solution Explorer, right-click the solution and select Add, New Project from the context menu. For the project type, select the Visual C# Projects item. Then select Class Library in the templates section and give it the name CSLibrary, as shown in Figure 6.2. 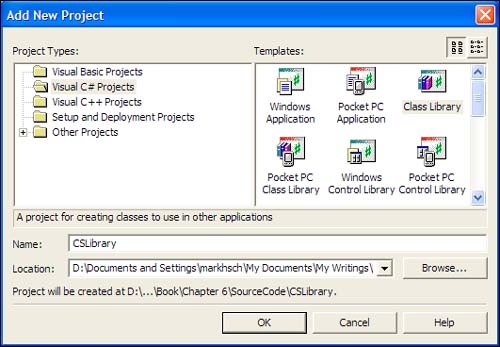 Finally, repeat the process of creating a class library for C++ by selecting to create a new managed C++ class library from the Add New Project dialog and name it CPPLibrary.

Open the file CPPLibrary.h, where you will find a namespace declaration with a generic class definition. Writing a class library DLL is very simple with the .NET Framework; any namespaces and public classes are automatically made available to any user of the component library. The project wizard already created a sample class for you, so all you have to do is simply change the given name to a more appropriate name for our application. Change the class from the name Class1 to CPPClass. The next step is to add a member function. In the Class View, find the CPPClass definition within the CPPLibrary project. Right click the class and select Add, Add Function. In the Add Function dialog displayed, set the return value to String* and the function name to GetMsg. Then click Finish. You should now be looking at the C++ header file once again, and you'll notice the new function within the class. Instead of returning NULL, however, it returns a string instead, as shown on line 14 of Listing 6.1.

At this point, CPPClass has one method, GetMsg(), that returns a pointer to a String object containing a message. Adding an unmanaged class, CPPUnmanagedClass, to the namespace is done by adding the code shown in Listing 6.2.

Finally, you need to include the windows.h file into the project so it can compile the unmanaged code. The include statement shown here is added to the stdafx.h file in the project:

The C# class is much more compact than the C++ class. Defining a similar method to return a message in the C# class is done by modifying the class1.cs file in the project you created earlier. First of all, as you did in the C++ project, change the class name to something more appropriate. Add the following class definition to the CSLibrary namespace, either manually or using the Add New Function dialog, and you're finished with the C# class library:

Using the Windows Form designer in Visual Basic makes it quick and easy to define a Windows Form, unlike doing it manually in Visual C++. The type of form you are creating for this application simply has a text area for the message to be displayed and buttons that will call the appropriate components when clicked.

Start by using the Form designer and dragging the appropriate controls to the form, as shown in Figure 6.3. Also use the property dialog for each of the controls and name the controls as shown. Name the buttons bntCS, btnCPP, btnUnmanagedCPP, and btnDone. Name the message text label stMessage. 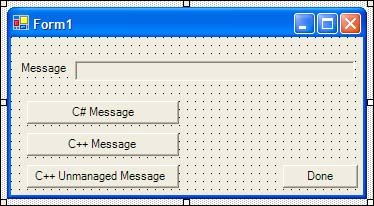 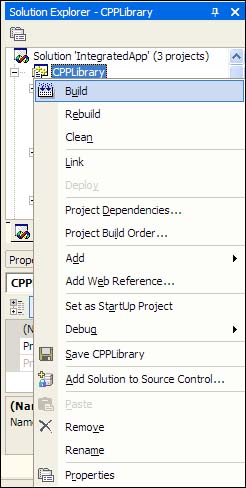 Once you have built the components, use the right-click menu and select the references in the IntegratedApp project. Then select Add Reference from the menu to display the Add Reference dialog shown in Figure 6.5. Your components won't be shown in this dialog; therefore, use the Browse button to open the Select Component dialog, find the DLL files that were built for the components, and add them. 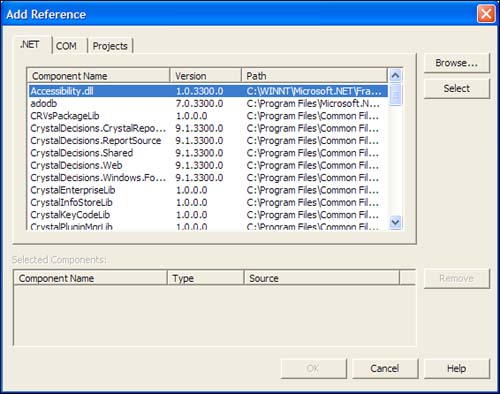 Once you've added the references for both the C# and C++ components, you can use the classes in the Visual Basic project.

Using the C# and C++ Classes

When a user clicks the buttons on the Windows Form you designed earlier, you can use the classes in the appropriate components to get a message and display it in the stMessage control.

Adding the appropriate event handlers for each of the buttons is done by double-clicking each of the buttons on the form in the Windows Form editor. As you double-click these buttons, appropriate event handlers are added to handle each button's Click event. Add the code shown in Listing 6.4 to use the classes, display the messages, and close the application when the user clicks the Done button.

You can now build the application and run it by pressing the F5 key or selecting the Debug, Start menu item from the menu bar.

If you watch the output window within the debugger, you will notice that when the application starts, the components are not loaded. As you click each button on the dialog, the appropriate component is loaded when used for the first time. This feature speeds up the loading of applications if the code is broken into class libraries.