Stimulated by the success of superior Japanese manufacturing methods, many Western manufacturers in the 1980s worked overtime to benchmark remarkable companies such as Toyota and Sony. By the early 1990s, many had achieved a huge breakthrough in their understanding of competitive advantage through manufacturing. A large portion of the learning came under the heading of concurrent engineering, or CE, or design for manufacturing, known as DFM (Nevins and Whitney 1989, Ulrich and Eppinger 1994, Fleischer and Liker 1997). Managers realized that they could not achieve improved manufacturing performance solely, or even primarily, by concentrating on the factory; rather, they had to focus on concurrently designing the product and the manufacturing process—that is, designing the product for manufacturability.

Three-dimensional concurrent engineering (3-DCE) extends this concept from products and manufacturing to the concurrent design and development of capabilities chains. In particular, once one recognizes the strategic nature of supply chain design, one feels almost compelled to integrate it with product and process development.

The good news is that the implementation of 3-DCE does not require radical surgery in organizational processes. This news should come as a relief for the many who have re-engineered and have been re-engineered by managers who insist they must blow up their existing organizations in order to create necessary change.

Instead of such a radical solution, even as an antidote to it, I advocate leveraging one basic organizational methodology, variously referred to as concurrent engineering, the product development process design-build teams, or integrated product teams (IPTs), as the core of the implementation process for three-dimensional concurrent engineering. 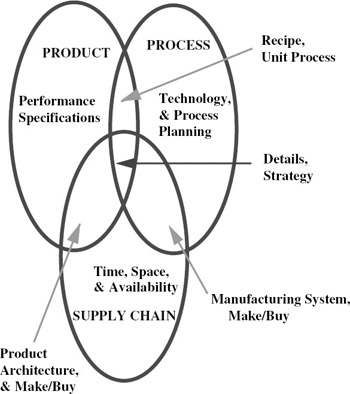 Figure 9.2 attempts to capture visually many of the ideas of 3-DCE. One can consider how architecture decisions are made through discussions within and across the product, process, and supply chain organizations. A further refinement of the over-lapping areas of concurrency across product, process, and supply chain development appears in figure 9.3, which also highlights the imperative of concurrency. 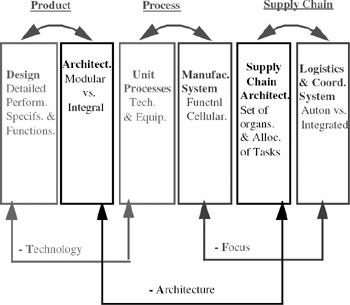 This figure divides each of the three developmental areas—product, process, and supply chain—into two sub-activities:

The next two cases, from Intel and Chrysler, further illustrate these ideas.

In an era and industry of unprecedented clockspeed acceleration, Intel Corporation has risen about as quickly as any corporation in history as a major manufacturer. Most of Intel's growth to a $30+ billion corporation occurred over less than a decade, a period during which the company built highly capital-intensive factories and introduced new products at a blistering pace. Much of its success in keeping competitors at bay during the period of explosive growth resulted from the ability to execute new product and process development with many new suppliers at breakneck speed. In short, Intel proved to be a master of fast-clockspeed 3-DCE.

Given the complexity of the underlying technologies, we can gain a valuable understanding of how Intel simplified the daunting 3-DCE challenges it faced. Its approach offers lessons for any company contemplating a shift to three-dimensional concurrent engineering. Intel's microprocessor product families—popularly known as the 286, 386, 486, and Pentium processors—resulted from a massive product development process, involving hundreds of engineers and scientists working over multiple sites and multiple years (Osborne 1993).

Historically in the semiconductor industry DRAM (dynamic random access memory) products absorbed the lion's share of new process technology investment. Each new generation of product—64Kb RAM, 256Kb RAM, 1Mb RAM, and so forth—was launched on an all-new generation of manufacturing process (typically denoted by the smallest line-width on the integrated circuits). Thus, for a DRAM manufacturer, launching a new product meant simultaneously launching a new process—always a complex affair. Through most of the 1980s, the Japanese semiconductor companies concentrated on DRAM design and production, exploiting their skills in precision clean manufacturing. The Japanese tended to be the process technology leaders into each new smaller line-width process generation.

By the early 1990s, however, Intel found itself in the position of needing new processes (for example, more metallization layers) in advance of the DRAM industry's needs or its willingness to invest in such processes. As a result, the DRAM makers no longer unequivocally drove process development. Having emerged as the 800-pound gorilla of the industry in the early 1990s, Intel had to learn to be a process technology leader and to develop systems whereby it could continue to improve process technology while accelerating its pace of product development.

Intel crafted a brilliant 3-DCE strategy that used product/process modularity to reduce significantly the complexity of the company's technical challenge: Throughout the 1990s, the company launched each new microprocessor generation on the "platform" of an old (line-width) process. Alternately, each new process generation was launched with an "old" product technology. For instance, Intel introduced its i486 chip on the one-micron process developed for the i386 chip, a process that had already been debugged. Following the success of this process, Intel created the .8micron process, which was first tried on the now-proven i486 chip. Next, it launched the Pentium chip on the proven .8-micron process before moving it over to the new .6-micron process. Leveraging this system of alternating product and process launches, Intel created almost perfect modularity between product and process, a marriage that reduced dramatically the complexity of any given launch. Reducing the complexity of concurrent engineering has, of course, been one of the keys to Intel's success in its hyperfast-clockspeed industry.

When viewed through the lens of the third dimension, however, Intel's link between process and supply chain is much more integral. That is, process development goes hand in glove with supply chain development. Especially by the mid-1990s, when Intel needed to drive new process technologies rather than adapt technologies that had already been pretty much debugged by the DRAM manufacturers, Intel found itself nurturing start-up companies that were just developing the advanced technologies necessary for the next-generation processes Intel needed. As a result, Intel fostered integral development of new processes and new suppliers to support those processes.

In some ways, Chrysler of the 1990s could be likened to Compaq of the 1980s. Through a modular product and supply chain strategy, each company managed to upset the advantages of much larger rivals and to trigger a chain reaction of events that altered dramatically the structure of the entire industry (Dyer 1996).

Through the lens of 3-DCE, we can see both the strengths and potential weaknesses of Chrysler's strategy more clearly (Whitney 1998). By outsourcing the development and integration of numerous automotive subsystems, Chrysler cut dramatically the total time and cost required to develop and launch a new vehicle. The company has effectively exploited the opportunities from this approach, as described earlier.

Because Chrysler, in contrast to many of its competitors, is so quick from concept to car, the company has enjoyed a high rating with consumers on the most desirable designs and features. Such designs allowed Chrysler to charge premium prices with minimal rebating throughout much of the 1990s.