In the previous lesson, you saw that when a Windows NT domain controller is upgraded to Windows 2000, it no longer provides the Directory Replicator Service. In this lesson, you'll learn strategies to employ to ensure that replication of files such as logon scripts is maintained during the upgrade.

File replication is often used in Windows NT domains to ensure that copies of files such as logon scripts are kept up-to-date from a single master copy. Replication is performed from an export server (usually the PDC) to the BDCs. The Directory Replicator Service (also known as the LAN Manager Replication Service or LMRepl) performs this replication, and its parameters are set using the Server Manager administrative tool in Windows NT. If necessary, prior to upgrading servers in the domain, consider moving all file replication to a Windows NT server in the domain and upgrade this server last. This server can be a member server as well as a domain controller. Moving all replication to a single export server retains the replication facility, but you must remember to reconfigure all the import clients to talk to this new export server if you have hard-coded all the settings. 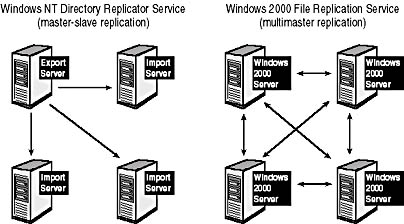 During the upgrade, you'll have to decide how to manage the lack of a Windows NT replication service. There are two possible solutions: 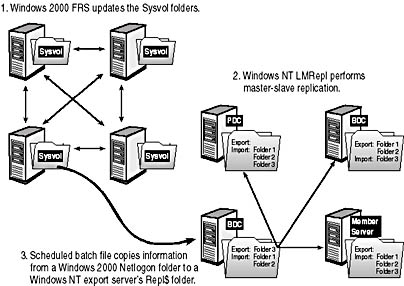 Note that in Figure 6.24, the replication is between two different domains. If the domains were running in mixed mode so that you had both Windows 2000 servers and Windows NT servers operating in the same domain, you would configure the Lbridge.cmd script differently. In a mixed scenario, you would also need to customize the Lbridge.cmd script to copy files from the Windows NT export servers to the Netlogon share of a Windows 2000 system. Other general tasks to perform include the following: 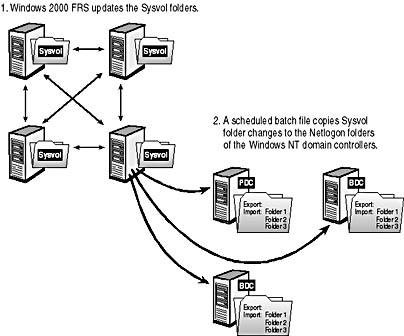 The Lbridge.cmd script and its documentation file Lbridge.doc is supplied in the Tools folder you copied to MIGKIT1 from the Supplemental Course Materials CD-ROM. This script enables you to copy files from Windows 2000 to Windows NT or from Windows NT to Windows 2000, depending on which files need updating. It does this by working in conjunction with Xcopy or Robocopy commands. Robocopy is a "reliable" copy utility included with the Microsoft Windows 2000 Server Resource Kit and the Microsoft Windows NT Server Resource Kit. You can edit the Lbridge script to call either the Robocopy or the Xcopy program by reading the remarks included in the script file.

In this practice, you'll use a customized version of the Lbridge.cmd script file called Migbridge.bat to replicate scripts from the upgraded Windows 2000 domain controller MIGKIT1 to the export folder of the Windows NT BDC MIGKIT2. Finally, in this practice, you'll schedule this script to run at regular intervals.

Before starting this practice, be sure that PC1 is running and was upgraded to Windows 2000 in the first practice of this chapter. Also be sure that MIGKIT2, the BDC of the Windows NT MIGKIT domain, is running. Make sure the file Migbridge.bat is present in the C:\Tools folder of MIGKIT1.

For Migbridge.bat to run correctly, you must allow administrators in the domain to have access to the export folder on MIGKIT2.

To give the Administrators group access to the export folder

Now that you've granted the Administrators group full control of the Export folder, you'll be able to run the customized Lbridge.cmd script.

By copying the files to an export folder on an Windows NT system, you could use the file and folder replication within Windows NT to redistribute all these files to other Windows NT servers. Take some time to view the contents of the Repbridge.bat and Migbridge.bat files and the Lbridge.cmd script on which they are based.

You could also have performed this procedure using the Netlogon folder on MIGKIT2. If you do this on a live system, bear in mind that the default share permission of Read on the Netlogon folder will need to have extra permissions added for the Administrator or another delegated person to execute the batch file. You should also take care not to overwrite any other information coming to the Netlogon folder from other export servers.

To schedule the Repbridge.bat file to run at regular intervals

When that isn't possible, you also learned how to use the Lbridge.cmd script to synchronize updates between Windows 2000 and Windows NT servers. You also learned to do the following: