Let P = {p1, p2, ..., pn} be a set of points in the two-dimensional Euclidean plane, namely the sites. Partition the plane by labeling each point in the plane to its nearest site. All those points labeled as pi form the Voronoi region V(pi). V(pi) consists of all the points x's at least as close to pi as to any other site:

Some points x's do not have a unique nearest site. The set of all points that have more than one nearest site form the Voronoi diagram V(P) for the set of sites.

Construct the dual graph G for a Voronoi Diagram V(P) as follows: the nodes of G are the sites of V(P), and two nodes are connected by an arc if their corresponding Voronoi polygons share a Voronoi edge. In 1934, Delaunay proved that when the dual graph is drawn with straight lines, it produces a planar triangulation of the Voronoi sites P, so called the Delaunay triangulation D(P). Each face of D(P) is a triangle, so called the Delaunay triangle.

The proof of Delaunay's theorems and properties is beyond the scope of this chapter, but can be found in [29]. Among various algorithms for constructing the Delaunay triangulation of a set of N points, we note that there are O(NlogN) algorithms [11, 15] for solving this problem.

Spatial layout of a set of points can be coded through such an anglogram that is computed by discretizing and counting the angles produced by the Delaunay triangulation of a set of unique feature points in the context, given the selection criteria of what the bin size will be, and of which angles will contribute to the final angle histogram. An important property of our proposed anglogram for encoding spatial correlation is its invariance to translation, scale, and rotation. An O(max(N, #bins)) algorithm is necessary to compute the anglogram corresponding to the Delaunay triangulation of a set of N points. 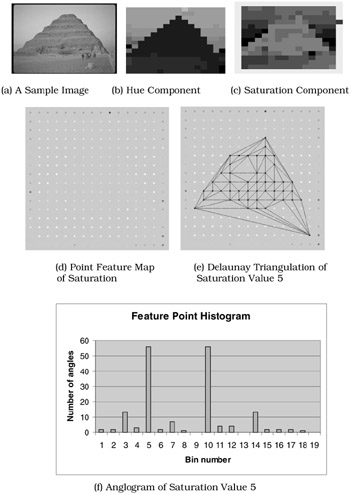 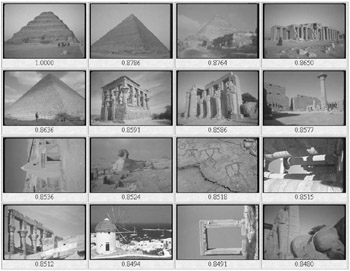