Before you can playtest, you must have playtesters. But how do you begin and who should you trust? In the early stages, when you're creating your first prototype, the single best tester you have is yourself.

Once you move past the foundation stage and the prototype is playable, test it with people you knowwell-such as friends and colleagues outside the design team. These people will bring fresh eyes to the project and will uncover things you haven't considered. You may need to be present to explain the game to them when you begin. This is because the prototype will likely be incomplete in the structure stage. The goal is to get to a version that people can play using only the materials provided and without any intervention from you. You should be able to give some playtesters the prototype materials, and they should have enough information to complete the game. With a physical prototype, this will require that you write a full set of rules. With a software prototype, the user interface will need to be completed and you may need some written rules.

Once your game is playable and you have a clearly defined set of rules, you must wean yourself from your confidants. Testing with friends and family may feel like it works, and it does in the early stages, but it won't suffice once the game matures. The reason is that your friends and family have a personal relationship with you, and this obscures their objectivity. You'll find that most of them are either too harsh or too forgiving. It all depends on how they're used to interacting with you. Even if you believe that your confidants are providing balanced feedback, it's best not to rely too heavily on a small group of individuals. They will never give you the objective, broad criticism that you require to take your design to the next level.

As you build a working version of your game, you'll naturally try it out repeatedly to understand how it functions. If you're collaborating with other designers on the prototype, you'll self-test both as a group and as individuals. Self-testing is most valuable in the foundation stage of a prototype when you are experimenting with fundamental concepts. It is a large part of the process that enables you to come up with the core mechanics for the system. It is also where you create solutions to glaring problems with the play experience. Your goal at this stage is to make the game work-even if it's only a rough approximation of the final product. You will continue to self-test throughout the life of the project; however, as you progress and your game evolves, you will have to rely on outside testers to gain an accurate understanding of what it is you've created.

Exercise 8.1: Test it Yourself

Take the original game prototype that you developed in Exercise 7.9 and playtest it yourself. Describe in detail what goes through your head as you play the game. Start a playtesting journal in which you record all of the feedback you get from yourself and other testers.

Now take your original prototype and give it to some confidants. Have them test it. Write down your observations as they play. Do your best to determine what they think of the game without asking them any direct questions.

Playtesting with people you don't know

It's often hard to show your incomplete game to strangers. It feels comfortable to be around people you know and trust. Our advice is to get over your fear of the unknown. It is only through the process of inviting total strangers into your office or home and allowing them to fiddle around and criticize your creation that you will gain the fresh perspective and insight you require to improve your design. This is because outsiders have nothing to lose or gain by telling you honestly how they feel. They are also untainted by any knowledge of the game or personal ties. If you chose them carefully and provide the right environment, you will see that they can be as articulate and dedicated as your coworkers and confidants. There is no substitute for finding good playtesters. Make them an extension of your team, and the results will become apparent immediately.

Playtesting with your target audience

So how do you find these perfect playtesters, who have never heard of you or your game? The solution is to tap into your community. You can recruit playtesters from your local high school, college, sports clubs, social organizations, churches and computer-users groups. The possibilities are endless. You can also find a broader demographic of recruits by posting online or putting an ad in a local paper. The more sources you try, the better your candidate pool will become. It's as simple as putting up a notice in a local game store, college dorm, library, or recreation center. You'll find that people want to be part of the process of creating a game, and if your invitation sounds attractive, you shouldn't have trouble lining up testers.

The next step in recruiting is actually screening out and turning down applicants. You can only do this once you get enough applicants. What you should be looking for is a group of testers who are articulate enough to convey their opinions to you. If they can't hold a decent conversation on the phone, they probably won't be of much use. We don't expect you to be an expert in demographics or sampling, but it doesn't hurt to ask a few questions to help sort out which applicants are going to be useful and which are a waste of time. Questions may include: What are your hobbies? Why did you respond to my bulletin? How often to you buy this type of game? If the tester isn't a consumer of the type of game you're making, his feedback will be less useful.

The ideal playtester is someone who represents your target audience. You want testers who actually go out and spend their hard-earned money to buy games like yours. These people will give you far more relevant feedback because they will have a gut instinct for what works. They will also be able to compare your game to others and provide you with additional market research. And most importantly, they know what they like and what they dislike, and will be able to tell you this in excessive detail. Once you tap into your audience, you will uncover a wealth of information and gain an insight into your game that no one else can provide.

Now, it's time for you to recruit several total strangers to playtest your game prototype. Make sure that they are in your target audience. Set up a time with these playtesters to conduct the test. Exercises 8.4 will help you prepare to get the most from the session.

The more diverse a group you can recruit, the better. By diverse, we mean a broad range of people within your target audience. You want to tap people who play your games, but you don't want to focus on too narrow a section of your total audience. Your pool of testers should represent the entire spectrum of consumers of your product. Posting notices on gaming web sites is a great way to recruit testers in your area.

If you're worried about someone stealing your ideas, have them sign a nondisclosure agreement (NDA). This is a simple agreement where a person promises not to tell anyone about your product until it is released. In game companies, playtesters are typically paid in cash or free games. With independent games and personal projects the testers are typically not paid but gain the satisfaction of contributing their thoughts.

The level of caution you take is up to you, but remember this: don't be paranoid. The fact is that99.99% of the people out there have no intention of stealing your ideas, and even if they did, the vast majority wouldn't know what to do with your game once they stole it. The benefits of using playtesters far outweigh the perils. In fact, the risk of using testers is negligible when compared to what else can go wrong during a production.

Last but not least, you may want to provide snacks and drinks while your testers are playing. Not only is this common courtesy, but it makes your testers feel as if they owe you something, which means that they are more likely to provide you with detailed feedback. It also makes it more likely that your recruits will return at a later date to test again. You'll want to use the same testers periodically throughout the production to gauge how they feel the game is progressing. You may even find that features which you removed or changed don't work as well, and these testers will be able to point that out. But don't become too dependent on a handful of testers. It's still smart to keep fresh recruits streaming in throughout the process. There's nothing like a pair of virgin eyes. Figure 8.2 shows the various stages of prototyping and the types of playtesters you should involve at each stage. 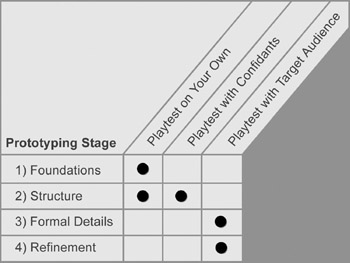 Figure 8.2: Types of playtesters appropriate for each stage of prototyping