If you've ever decided to take a curious trip around your hard drive, you've surely discovered that Mac OS X includes tens of thousands of files, organized in hundreds and thousands of folders and sub-folders. If you're a former user of Mac OS 9 or earlier, the sheer number of files that are present is enough to make you wonder if upgrading to OS X was such a great move. However, the truth is that despite the large number of files, OS X and its applications are organized in a fairly logical manner. Understanding the basics of application and system software organization will help you better understand installations (and installation troubleshooting).

Where Are Things Installed?

I spent a good amount of time talking about OS X's file and folder organization in Chapter 1, but I'm going to briefly revisit this organization as it relates to software installation.

If you previously used a Mac running Mac OS 9 or earlier, you'll remember that when you installed an application, you generally also installed various other files needed by that application. Sometimes these files were conveniently located in the same folder as the application itself; however, they were often scattered across your hard drive—some in the Extensions folder, some in the Control Panels folder, some in various other locations depending on the application.

This made for a very messy hard drive, and for potential problems. An application could stop working as a result of seemingly innocuous actions such as:

Mac OS X makes some impressive strides towards eliminating this type of situation by using what are called packages (technically called bundles, but since Apple has taken to calling them packages, I'm going to do so as well). A package is actually a folder of files that acts like a single file. For example, an application package is a folder that contains an application and its support files; however, the package looks and behaves like an application—double-clicking it doesn't open the folder; rather it launches the application inside. An installer package is a folder that contains all the files and/or resources needed for a particular software installation; double-clicking on this kind of package launches Mac OS X's Installer utility.

File packages have a number of advantages. Most importantly, as I'll discuss shortly, is that they make installing new applications much easier. But in addition, they also make it less likely that a user will accidentally move or delete files needed by applications, and they make it easier to move applications and other types of packages around (including deleting them when you want to).

To see a package in action, navigate to /Applications, and locate the Mail application. If you hold the control key and click on Mail (or right-click if you have a multi-button mouse), you'll be presented with a contextual menu. Select Show Package Contents from the menu. You'll be presented with a new Finder window with a folder called Contents. Inside that folder are the actual contents of the Mail package (Figure 4.1). If you dig into the Resources folder, you'll even see the various TIFF graphic files used by Mail for buttons and toolbars. 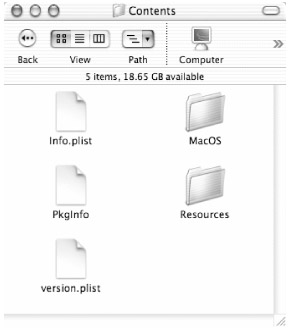 Figure 4.1: The contents of the Mail.app package

There are actually several types of package files. If you have chosen to view files extensions in the Finder (via Finder preferences), you'll recognize some packages by their file extension: installer packages end in .pkg; application packages end in .app. Files that end in .bundle, .framework, and .menu are a few other examples. All of these are examples of bundles of files that appear in the Finder as a single file.

It's possible to create your own packages, but you really don't want to do it unless you're familiar with all of the types of files that need to be included; if you're not, you'll be left with a package that doesn't do anything. For more information on packages, check out http://developer.apple.com/techpubs/macosx/Essentials/SystemOverview/AppPackaging/.

Getting a List of Files in an Installer Package

If you're really interested in the contents of a particular installer package (or even if you just want to see such a list once, so that you never have to wonder again), a neat little AppleScript called QuickBom (http://homepage.mac.com/bhines/applescripts.html) will show you. Drop a .pkg file onto the QuickBom icon, and QuickBom will create a new TextEdit document with a list of every file inside the package, organized by file path. (QuickBom is actually an AppleScript interface for the Terminal command lsbom, but automates the process.)

Many users (including myself) like to keep their hard drive neat and organized. For example, under OS 9 I liked to create a folder called Internet inside my Applications folder and put any Internet-related applications inside. However, this isn't such a good idea under Mac OS X, which can be quite strict when it comes to file location. As you might expect, system-related files only work properly when they are installed in the correct location. However, because of permissions issues and even software updater issues, many other files must also be in particular locations.

In addition to these reasons, in the case of Apple's own applications (those installed with Mac OS X), there is an even more persuasive argument for keeping them where they were originally installed: the Mac OS X software updaters will sometimes only update software that is located in its original location. For example, if you move the Mail application out of the /Applications directory, or even just inside a sub-folder within /Applications, a Mac OS updater (an update to Mac OS X, or an application-specific updater), may not update the Mail application. Sometimes the updater will look for Mail in its original location, and when it doesn't find it there, it will either do nothing, or will install a new package of files where Mail should be. This package will look like a new Mail application package, but will only contain the files that were supposed to be updated within the Mail package. In other words, it will be incomplete and will not function. Apple claims that as of OS X 10.2.3 this is no longer an issue; however, I've still seen reports of it occurring.

So in general, it's best to leave applications where they were originally installed. If, like me, you hate the idea of opening /Applications and having to slog through files just to find the application you want to use, you'll appreciate Chapter 5, and the Online Bonus Chapter "Furthering Finder Frustration." I'll spend a good deal of time talking about other ways to access applications and files.