Once you've created your custom Feature and copied the Feature into the Features directory on your Web front-end server, you need to install that Feature before you can use it on your SharePoint sites. Installing a Feature is a two-step process. It includes both installing the Feature on the Web front-end server and activating the Feature to a given scope. However, developing and working with Features also necessitates removal or reinstallation of Features, or both, invoking the need to deactivate and uninstall Features.

This section looks at the methods for installing, activating, deactivating, and uninstalling Features, specifically by using the stsadm.exe command-line tool and the administrative user interface. Information about manipulating Feature deployment using the SharePoint object model can be found in the Windows SharePoint Services 3.0 SDK. Information on deploying Features via SharePoint site definitions is included in the "Including Features in Site Definitions" section of this chapter. Table 26-5 summarizes the methods for managing the Feature life cycle.

Features can be installed and managed using the stsadm.exe command-line tool, which is located at the following path:

For example, back in the "Installing and Activating a Feature" section, you installed the LinkingExample Feature by typing the stsadm.exe -o installfeature -name LinkingExample command at your Windows command prompt. Figure 26-16 shows the resultant output in the command window, which includes the parameters for installing a Feature using the command-line tool. In this case, the optional -force parameter is included in the command line because the Feature is being installed for a second time. The -force parameter is used where you have updated a Feature and then need to redeploy that Feature to push updates to existing instances of that Feature already activated throughout sites.

You can now enter the stsadm.exe command prompt location on your server.

A server administrator is responsible for installing and uninstalling Features on the Web front-end server, using the stsadm.exe command-line tool. After Features are installed, they can be activated or deactivated at the given scope. Table 26-7 summarizes the required permissions for activating and deactivating Features through the administrative user interface.

After you've created your Feature and before you install it, you need to copy the folder containing your Feature to the Features directory on your Web front-end server, which can be found at the following location:

Ensure that you include any files and subfolders belonging to a Feature as part of that parent folder, such as any pages or elements files being provisioned as part of the Feature. When you install the Feature using the -name parameter in the stsadm.exe command-line tool, SharePoint looks for the Feature in the Features directory by default.

Be sure to do an IISRESET after running this command.

For more information about re-installing and updating Features, see the "Updating an Existing Feature" section in this chapter.

In addition to installing a Feature, you must activate a Feature before it can be used in the target scope, such as Web or Site. By default, Features are set to a status of deactivated following installation. The one exception occurs when a Feature is deployed as part of a site definition, where it will be activated when a site is provisioned based on the site definition containing the Feature.

To activate a Web-scoped Feature through the administrative user interface, complete the following steps:

For example, in Figure 26-17 the LinkingExample Feature has been activated on the Fabrikam site, denoted by the Name of Toolbar And Menu Links and the display of the Active Status button alongside the Feature. 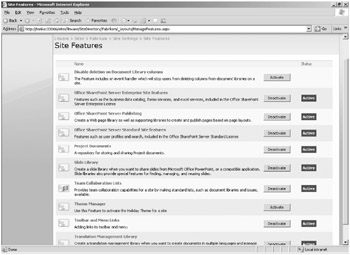 Features can also be activated through site definitions. This method is explained in the "Including Features in Site Definitions" section of this chapter.

Feature.xml file, which can be found at the following location:

Hidden features are Features that have the Hidden attribute set to True in the Features.xml file. A dependent Feature, or a Feature depending on another Feature for activation, can be either hidden or visible if it is in the same scope as that Feature. However, a Feature, such as the Team Collaboration Feature, sponsoring other Feature activations cannot be hidden.

Steps for Creating a Solution Package

The steps for creating a Solution package for deploying Features are as follows:

To create the Diamond Directive file, add a new file to the same project containing the

Manifest.xml file and give it the .ddf extension-for example,

SharePointFeatures.ddf. The following example .ddf file includes references to the

Manifest.xml file, as well as the assembly and Features to be included as part of the CAB, and it provides Makecab.exe with the directives to compress the files into the CAB:

Generate the CAB and WSP File

Open your Windows command-line tool, browse to the location of the project containing the

Manifest.xml and .ddf files, and type the following command:

Upon successful execution, Makecab.exe generates a new folder, named Package. The Package folder contains a .wsp file, which is the file you will use to add the Solution to your SharePoint Solution store. The name of the .wsp file will be that name defined in the .ddf file's CabinetNameTemplate declarative, in this case

To deploy the Solution, you need to add the Solution to the SharePoint Solution store. To do this, complete the following steps: 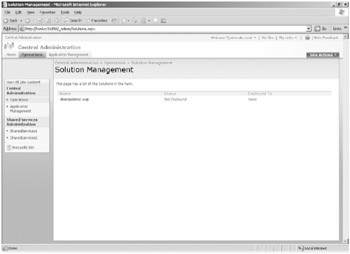 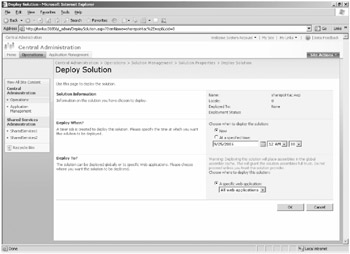 Figure 26-19: Deployment options for the Solution

You can choose to deactivate instances of Feature. For example, you can turn off a particular functionality on your sites or a given site, or you can choose to uninstall a Feature, which completely removes the Feature from your SharePoint deployment. Features can be deactivated either through the administrative user interface or by using the stsadm.exe command-line tool.

To deactivate the Feature from a site using the administrative user interface, complete the following steps:

When you deactivate a Feature using the administrative user interface, you receive a warning message, as shown in Figure 26-20.

Figure 26-21: Attempting to deactivate Features without the required URL parameter

To uninstall the Feature using the stsadm.exe command-line tool, open the Windows command line tool and type the following command:

You should deactivate Features before uninstalling them, unless they are Web-scoped or farm-scoped Features. If you attempt to uninstall a site or Web-scoped Feature before deactivating that Feature, you receive a message notifying you that the Feature is still activated but you can optionally use the -force parameter to forcibly remove the Feature without deactivating it, as shown in Figure 26-22.

Files deployed as part of the Feature <Module> element, such as an ASPX page, are not removed when a Feature is uninstalled. For example, if you deploy an ASPX page as part of a Feature and you then uninstall the Feature, you can still navigate to that ASPX page by typing the path to that page into the address line of your browser.

You might find it necessary to update a Feature after installation. For example, you might want to modify a toolbar link or add a resource file, or you might add and deploy an event handler to existing instances of a Feature. To update an existing Feature, you must reinstall the Feature using the -force parameter and perform an IISRESET. You can do this by typing the following stsadm.exe command:

Alternatively, you can include the AlwaysForceInstall attribute in the

Feature.xml file and set the value to True, such as AlwaysForceInstall="TPYE". This removes the need to enter the -force parameter in the command line during uninstall.

You should avoid changing the scope on an existing Feature in scenarios where that Feature has been activated within the given scope. For example, if you change the scope on an existing Feature from Web to Site, you need to reinstall the Feature, perform an IISRESET, and then attempt to deactivate the Feature from sites where the Web-scoped Feature was previously deployed and activated. Through the administrative user interface, you'll receive a warning message stating, "The Feature Is Not Currently Active," and you will not be able to deactivate the Feature from the previous scope.

Attempting to deactivate the same Feature through the stsadm.exe command-line tool also generates an error, as shown in Figure 26-23.

Figure 26-23: Attempting to deactivate a Feature after a scope change