4.7 Placement of other Domino databases

4.7 Placement of other Domino databases

The mail databases should go into a separate filesystem below the notesdata directory of the Domino server. To determine how many mail directories you need in your environment, look at the number of mail users, the total size of the mail databases (including fulltext index), and the growth-rate of your mailfiles (define quota is always a good idea).

Another point is how long it takes for a full recovery of one directory; you can simply put all your mail databases into one directory by defining a huge filesystem, but what will your users say if you take 24 hours to recover the directory?

From a performance point of view, it is not important to spread the databases among multiple filesystems. Because of the virtual device concept in VM, Linux has no effect on which physical device the data is written to. If you run your Linux natively on a zSeries machine, you must take care of your device-to-filesystem allocation.

The amount of DASD space that is needed for Domino depends on the amount of data that you will store. This is the same as for other Domino platforms. For mail databases, this is normally in the range of 50 to 150 megabytes per user, and will typically grow as the users become more advanced in their use of Domino. Installations with thousands of users will therefore require hundreds of gigabytes, if not terabytes, of DASD space.

Before installing Linux, you should also plan for the proper sizing of the root filesystem and the /opt filesystem. The binaries for products installed will typically be placed in a subdirectory under /opt. The Domino binaries need about 1.3 GB. For the installation, an additional 600 MB is needed for the tar file.

A good starting point might be to size the root (/) and /opt filesystems at about 5 GB or two 3390 mod-3 full pack minidisks combined in a LVM. root (/) and /opt should be defined as separate mount points and not combined into a single filesystem. Also plan for /swap space, although it is far better to use virtual disk rather than real DASD, at least in a z/VM environment. This provides significant performance enhancements.

We recommend that you use a self-describing, self-documenting naming convention for filesystems and LVMs with in your DASD configuration.

At the Linux level, name your LVMs so that the purpose of the LVM is obvious. We used a volume group name of mail1 and a logical group name of mail1 for the LVM used for the .../notesdata/mail1 directory (and mount point). Another lesson learned was that there were problems that were not obvious at first glance when we created a volume group for all of Domino and the individual logical groups for the subdirectories. It is also a good idea to have a self-describing naming convention for your directories.

At the z/VM level, you cannot assign a name or label to a minidisk, because the minidisk definition just maps a logical device address to a physical device. When assigning DASD to z/VM, it is a good idea to have a sequence of addresses to belong to the same z/VM LPAR. The VOLSERs for these DASD packs should indicate their use on Linux systems. As an example, we used a convention of LNXxxxx, where xxxx was the device address for the VOLSERs of packs used under Linux.

4.7.5 Example of our filesystem

Under VM, we installed four Domino servers in three separate Linux VM guests. So we had two Domino servers on their own Linux and two partitioned Domino server in a third Linux system. In Figure 4-6 on page 69, the filesystem for a Linux hosting one Domino server is shown. Only the directories that begin with a /(in bold and italics) are mount points. For clarity we have omitted other (unimportant) directories inside /opt and notesdata. 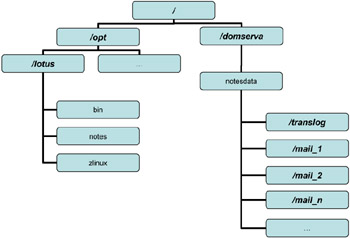 The notesdata directory is a directory under domserva and within the domserva mount point. The directories mail_01, mail_02, mail_03, mail_nn are also separate mount points, as is translog.

Much thought went into deciding on the structure for the servers used in this redbook project. There is a greater view that must be looked at when planning the use of DASD than we show in the example. All of the servers that will run in the z/VM LPAR or the Linux LPAR as a whole should be considered and planned for. Look at the total view of all DASD used across all servers.

In our case, we debated for a long time about the best way to lay out our mail and other database directories. In doing so, we considered the total size of mail files, total number of databases, the channel path to the DASD, and the types of DASD available to use (ESS vs. RVA), and so on. All of these factors must be looked at before considering how to lay out the Domino directory structure.

Even before installing Linux, a decision had to be made as to which of the filesystem types to use, journaled or non-journaled. For the journaled filesystems, we had a choice of types. In at least one instance, we used ext2, a non-journaled filesystem. For Domino, we found this is a mistake. It can lead to very long startup times for the Linux guest in the event of a crash. ext2 also performs extensive checks on the filesystem after every twenty starts of the Linux image.

In retrospect, we should have used ext3 or another journaled filesystem to improve reliability of the filesystems on all Linux images. A journaled filesystem is highly recommended for use with Domino. ext3 has been part of the Domino product test in the Poughkeepsie lab, as well as during our redbook project.

In Chapter 2, "Planning" on page 13, we provide a worksheet to help you plan the use of the mount points and the filesystems. At the very least, plan for separate filesytems at mount points for the directories listed in Table 4-6.