This chapter contains a lot of information, and it may seem like a lot to chew. But don’t worry—you can do it! Just take the chapter in small segments, digesting the theory of OO as you go. After you’ve worked your way through the theories and examples, I guarantee you’ll have a good grasp of OO. Of course, if you’re the kind of learner who prefers concrete examples, feel free to skip to the examples later in this chapter (the examples start with the “ JavaScript OO Lite ” section). Then you can refer back to the OO theory as needed. Whatever works for you!

The dot operator, which is a period (.), is used to show the relationship between an object and its values. You’ve already seen quite a few examples involving the dot operator in the earlier chapters of this book, so you probably are pretty familiar with it by now.

For example, taking the rectangle.width property I mentioned a moment ago, this statement:

assigns the value 75 to the width property of the rectangle object. The following statement:

retrieves the value stored in the rectangle.height property and assigns it to the variable theNum.

This simple example shows you one of the advantages of working with objects: An object serves to group conceptually related values. Conceptual grouping such as this leads to the ability to create modular programs that are easy to understand, debug, and maintain.

You should also know that the values of an object can also include other objects and specialized functions called events. When an object causes, or fires, an event, code placed in an event handler procedure is processed. You’ve seen numerous examples of this already in this book, for example, the code placed in an onClick event handler that’s executed when the user clicks a button. Events are important enough to have a chapter to themselves— Chapter 8, “ Understanding Events and Event-Driven Programming.” Because this book is primarily about learning the craft of programming, I haven’t gone into great detail about the specific event handlers that are available in JavaScript when working with a document loaded in a Web browser. You’ll find much more information about these events in Chapter 8.

Collectively, the fields, properties, methods, and events of an object are called the object’s members.

Let’s sit back for a moment and consider the concept of a class and how it relates to objects. It’s likely you’ve heard the term class before (and I don’t mean something you attend, snooze through, and try for a good grade!). A class is a blueprint for an object. It’s a central concept in object-oriented programming.

When all is said and done, this boils down to the notion that you can roll out many objects based on one class. The objects have in common prebuilt characteristics, such as the properties and methods supplied by the class (the blueprint). One advantage of this is that you don’t need to recreate these properties and methods each time—because they’re specified in the blueprint (the class).

An object that’s based on a class is called an instance of the class. When one creates a new object, one is said to instantiate the object.

When you create a new instance of an object, as you might suspect, you’re actually calling a function. This kind of specialized function, whose job is to create and initialize new object instances, is called a constructor. (Perhaps this goes along with the blueprint metaphor: You need a constructor to actually build the house.)

At this point, the picture you should have in your head is of a number of objects based on a class. These objects all have the same properties and methods although of course the value of these properties and the action of these methods are different for the different instances of the objects.

Now let’s run through some other concepts related to OO programming.

In contrast, shared members of a class don’t require object instantiation for access. These values are called shared because they can be shared by all objects in a program and are associated with a class rather than objects based on a class. For example, in JavaScript, the Math.random method, used in the Rocks, Scissors, and Paper program example in Chapter 3, “ Using Conditional Statements,” doesn’t require the creation of a Math object. You just use the expression Math.random() in a statement.

It’s likely that the single most important concept in OO is inheritance. This is a concept that’s intuitively easy to grasp. When one class inherits from another class, it “gets” all the members of the class from which it inherits. In other words, all the code associated with the original class is now part of the inheriting class.

It’s easy to see why inheritance is powerful. Once you’ve created your original class, you can, in a single statement, give all its functionality to the classes that inherit from it, which may then extend this functionality with their own capabilities.

As we’ll discuss in detail later in this chapter, in JavaScript you don’t really have classes; instead, you have prototypes, which for the most part you can think of as classes. So, somewhat more generally, whether the language you’re using implements classes or prototypes, one can look at inheritance as the practice of organizing objects into a hierarchy in which objects are categorized according to their common characteristics and purpose. This practice makes programming easier and more intuitive because you can easily find objects based on their classification in the hierarchy. You can also create new child objects that inherit the prebuilt characteristics of their parent.

In everyday life, you deal with a great many objects (for example, this book). Sometimes your things are messy, which isn’t fun and makes it hard to find things. Disorganized code is a huge problem, and organizing your programs using objects and object hierarchies helps to produce “neatnik” programs that have great clarity.

A class interface is a kind of contract for classes. The interface specifies the members (properties, methods, and so on) that a compliant class must have. A class is said to implement an interface when each of the members specified in the interface is present in the class. Generally, if you add code that states that a class implements an interface and then don’t include the members required by the interface, you’ll get a syntax error when you attempt to compile (or run) the code.

Sure, programming in an object-oriented fashion encourages code that’s modular and reusable (and I’ll have more to tell you about this in a bit). But for me, the great virtue of OO is that it allows programmers to build systems that closely model the real world. In these systems, if the classes— blueprints for the objects in the systems—have been designed correctly, then programs that unleash these objects will have great power. In fact, one can use OO systems of this sort to create programs that have a virtual life of their own.

This makes OO particularly effective for dealing with situations that involve complex interactions and when you don’t really know how things will turn out. Examples include modeling financial markets and forecasting weather. One interesting (and highly OO) program that I’ve written used ideas found in Jared Diamond’s Pulitzer Prize–winning book Guns, Germs, and Steel (W. W. Norton & Company, 1999) to model the progress of human cultures. As you might suppose, each culture was implemented as an object based on a class that represented a template for human societies. The program, written in C#, tracked the progress of each culture over time and showed the results of culture clashes, such as the one between the Spanish and the Incas discussed in Professor Diamond’s book (see Figure 7-1). 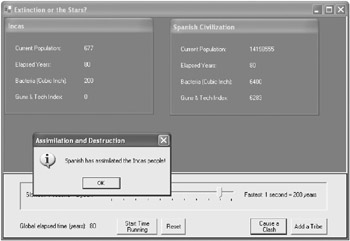 Figure 7-1: Each human society is implemented as an object using a general class as a template.

This was a reasonably easy program to write once I became clear about the classes, objects, and relationships involved—and it would, I believe, have been close to impossible to write in a non-OO fashion.

The following are some of the most important concepts related to the practice of object-oriented programming:

Oh, No, an OO Mini-Review

When I was in college, I took an advanced mathematics class with a pretty peculiar rule for the final exam. Each student was allowed to bring in an 8 11 sheet of paper to the final with whatever notes on it they’d like (otherwise, the final was “closed book”). Yes, in case you’re curious, you could write on both sides of the sheet of paper!

I thought the concept was pretty bogus, but who was I to buck the system? I got a pen with the finest tip I could find and filled both sides of my sheet of paper with what I thought would be the answers to the questions on the final.

I don’t really remember how much my “cheat sheet” matched what was on the final, but I do know that I learned a great deal by creating the cheat sheet. The teacher was actually pretty smart!

In that spirit, because I’ve thrown a great deal of OO theory at you in this section, I’d like to provide summary definitions of the key concepts as if there were going to be a final exam.

A class is a template, or pattern, for objects.

An object is an aggregation of values.

To use an object, it first must be instantiated, which means that an instance of the object must be created and initialized using the constructor provided by the class .

Once you have an instance of an object, you can use the properties, methods, and events that the object provides.

A property is used to save and retrieve a value, just as variables are.

An event is a special kind of function that’s triggered, or fired, in response to a specific condition, such as a button being clicked. An event handler is a placeholder that gives you a chance to execute code when the event is fired.

The key benefits of object-oriente d programming include clarity, reusability, and mo dularity. OO techniques are particularly helpful in situations that involve complex systems that may mimic real-life processes.

These benefits are partially obtained through abstraction, which helps the programmer to focus on obje ct characteristics that matter and to filter out unimportant details; encapsulation, which hides internal object data and only allows gated access to objects; and polymorphism, which lets different objects implement the same task but each in their own way.