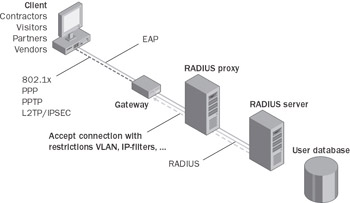 Because an IETF standards-based pure IPSec solution does not exist, Microsoft believes that L2TP/IPSec provides the best standards-based solution for multivendor, interoperable remote access VPN scenarios. Most major VPN vendors support L2TP/IPSec, even if their primary method is proprietary IPSec TM—this way the vendors can claim IETF compliance. Make sure that when looking for interoperability, you deploy the proper protocol and methods to comply with industry standards.

Customers should analyze the options for VPN solutions and give preference to those that are based on interoperable standards and which support user-based authentication, authorization, and accounting. If you are considering proprietary implementations of IPSec TM, carefully evaluate the availability of solutions based on L2TP/IPSec to support interoperability. You should also consider how your L2TP/IPSec solution might be complemented by PPTP-based solutions. Companies often want a high level of security when working with an untrusted network such as the Internet—and therefore, want the high level of security provided by L2TP/IPSec for external access users—while at the same time preferring to use VPN for security on their internal network. In this case, the combination of PPTP and L2TP/IPSec might make more sense for administrative purposes. Also, to provide certificates to new remote users, a combination of PPTP and L2TP/IPSec allows for the acquisition of certificates to happen under PPTP security and then continue post-certificate provisioning activities on L2TP/IPSec.

Microsoft encourages VPN gateway vendors to provide support for L2TP/IPSec for remote access VPN and as an option to complement IPSec TM for site-to-site (also known as router-to-router) situations, in which multiprotocol and multicast considerations come into play. By supporting L2TP/IPSec, PPTP, or both, Microsoft Windows clients can connect directly to the vendor’s gateway and other VPN solutions without customers having to change client-side code or load a third-party VPN client.