This section provides overviews of advanced security features that can be used with Windows Server 2003 and Windows XP VPN connections.

Symmetric, or private-key, encryption (also known as conventional encryption) is based on a secret key that is shared by both communicating parties. The sending party uses the secret key as part of the mathematical operation to encrypt (or encipher) plain text to cipher text. The receiving party uses the same secret key to decrypt (or decipher) the cipher text to plain text. Examples of symmetric encryption schemes are the RSA RC4 algorithm, which provides the basis for MPPE, and DES, which is used for IPSec encryption.

Asymmetric, or public-key, encryption uses two different keys for each user: one is a private key known only to this one user; the other is a corresponding public key, which is accessible to anyone. The private and public keys are mathematically related by the encryption algorithm. One key is used for encryption and the other for decryption, depending on the nature of the communication service being implemented.

With symmetric encryption, both sender and receiver have a shared secret key. The distribution of the secret key must occur (with adequate protection) prior to any encrypted communication. However, with asymmetric encryption, the sender uses a private key to encrypt or digitally sign messages, while the receiver uses a public key to decipher these messages. The public key can be freely distributed to anyone who needs to receive the encrypted or digitally signed messages. The sender needs to carefully protect the private key only.

The user’s certificate could be stored on the VPN client computer or in an external smart card. In either case, the certificate cannot be accessed without some form of user identification (PIN number or name-and-password exchange) between the user and the client computer. This approach meets the two factor authentication mentioned earlier—the something-you-know-plus-something-you-have criteria recommended by most security experts.

EAP-TLS is supported in Windows Server 2003 and Windows XP. Like MS-CHAP and MS-CHAP v2, EAP-TLS returns an encryption key to enable subsequent data encryption by MPPE. 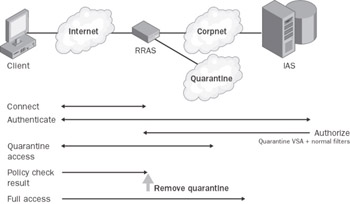 Network Access Quarantine Control is a combination of the following:

The remote access account lockout feature does not distinguish between malicious users who attempt to access your intranet and authentic users who attempt remote access but have forgotten their current passwords. Users who have forgotten their current password typically try the passwords that they remember and might have their accounts locked out.

As described earlier, just because the user has access to the network via VPN, that does not mean that the user should have access to every resource on the network while accessing from an unsecured location. Remote access policies that define authorization and connection constraints can be used to specify a set of IP packet filters that are applied per user or group to remote access connections. When the connection is accepted, the packet filters define the types of IP traffic that are allowed from and to the VPN client.

This feature can be used for extranet connections. An extranet is a portion of your organization network that is accessible to users outside the organization, such as business partners and vendors. By using remote access policy profile packet filtering, you can create a remote access policy that specifies that members of the Partners group can only access the Web servers at specific IP addresses or on a specific subnet.