The UML Deployment Diagram: Similar, but Not the Same 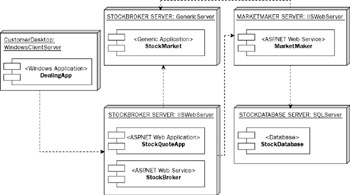 You can see that we have used UML components to represent the applications, an analogy that we first established in Chapter 2. UML nodes have been used to represent logical servers, and the binding of components onto nodes (refer to Figure 4-13) is equivalent to the binding of applications onto servers (refer to Figure 4-4). Dependencies between nodes in Figure 4-13 reflect the connections between servers in Figure 4-4.

Thus, the correlation between the two notations is high, with some notable anomalies such as the lack of support for zones in the UML notation.

Despite that high correlation, the two notations are not exactly equivalent in the sense of a one-to-one correspondence. As discussed previously, the single UML deployment diagram actually maps to a combination of two distributed system designers—Logical Datacenter Designer and Deployment Designer. Thus, the distributed system designers provide greater flexibility by decoupling the logical datacenter definition from the binding of application components onto logical server nodes.

While on the subject of UML we'll revisit the topic of dynamic modeling. You might remember that in Chapter 2 we indicated that the Distributed System Designers do not (yet) provide dynamic modeling capabilities analogous to the UML sequence and collaboration diagrams.

That's perhaps not what System Designer was intended for, but as a handy workaround it's the closest you'll get to model the dynamic (runtime) behavior of your applications using the current set of distributed system designers.