In the preceding coverage of the System Designer and Deployment Designer, we haven't actually deployed anything. What we've done is evaluate the deployment of our application systems against the requirements of the logical datacenter. In order to deploy properly, we need a deployment report that describes what to deploy, where, and how.

Deployment Designer provides a Deployment Report feature, which produces a document containing SDM meta-data from the application and application hosting layers. This information tells you what software needs to be deployed where, and how the applications and hosts need to be configured to support the deployment.

Generating a deployment report for the default system deployment (file DefaultSystem1.dd) that we created at the outset will result in a file named DefaultSystem11.html containing the deployment information as human-readable HTML. 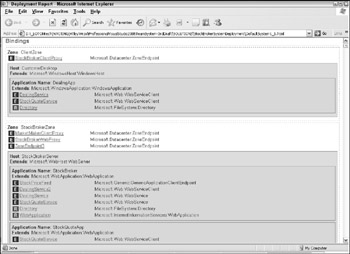 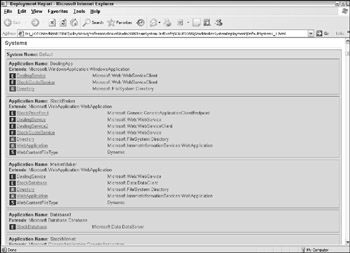 Ultimately, we'd like to be able to use that model-based information to provision or configure resources on demand, and this aspiration is made feasible thanks to the XML version of the deployment report, which is not intended for human interpretation. Because the format is XML, it raises the possibility of transforming the output, using XSLT, into an in-house format suitable for generating an automated deployment script.

The XML output can be very large (measured in megabytes), so it is impossible to list here in its entirety, but it's easy enough for you to reproduce as described. Figure 4-12, in which we have collapsed some of the XML elements to show the overall structure, gives you a feel for the information it contains. 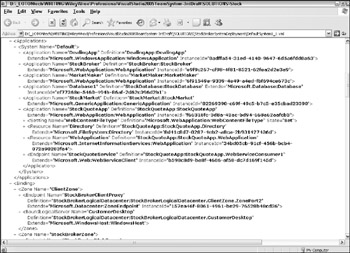 You can see two XML tagged elements, <Applications> and <Binding>, that correspond with sections of the HTML report. If you could scroll down, you would see more such sections.

Within the <Binding> element, we have expanded the <Zone> element corresponding with the ClientZone so that you can see—among other things—that the CustomerDesktop logical server is contained within that zone.

To clarify the overall structure just described, and in case it's difficult to see that detail in Figure 4-12, here is a simplified version of that hierarchy:

That should serve to whet your appetite to investigate further the syntax of the deployment reports. The point is that you—or more likely a third-party vendor—can devise tools that automate the deployment by interpreting and transforming the information contained therein.