Visual design within Visual Studio is not new, hence the name "Visual" Studio. For some time there have been visual designers for Windows forms and web forms so that you can lay out your screen designs without resorting to code, and so that you can add behavior to buttons and other controls without having to remember how to code their event handlers. There are also other visual designers such as the XML schema designer.

The new suite of visual designers complements the existing set by providing capabilities for modeling the static aspects of your application architecture, deployment infrastructure, and lower-level object design. The complete list of new designers that we'll be introducing in this chapter and covering in-depth in this part of the book is as follows:

As stated earlier, the first four comprise the Distributed System Designers (formerly called "Whitehorse") that are unique to the Visual Studio 2005 Team Edition for Software Architects. Class Designer is not unique to that edition, so you'll find it also in the Team Developer and Team Tester editions. We treat it as a member of the same set—rather than relegate it to another part of the book—because it operates in a similar fashion and contributes to the same overall visual modeling experience.

As we introduce each of the visual designers, keep in mind that we're doing just that—introducing them. Our aim is to provide only a preview of each of the diagram types, and to place those diagrams relative to one another in the Software Development Lifecycle (SDLC). As it happens, the diagrams that we use in the following preview are all taken from the StockBroker case study that runs through the subsequent chapters, but we're not setting out to explain the details of that running example in this chapter. You'll be introduced to it more formally at the end, as a road map for the chapters that follow.

Application Designer enables you to define the major applications (like components in UML), their endpoints (like interfaces in UML), and their interconnections. An example application diagram based on the StockBroker case study that we'll introduce later is given in Figure 1-3.

You can populate such diagrams by dragging application prototypes from the toolbox onto the diagram. These prototypes, rendered as stylized box shapes, represent ASP .NET web applications, Web services, Windows applications, and other application types. Once placed, the applications are adorned with consumer and supplier endpoints between which connections may be made.

You are allowed only one Application Diagram per solution, because ultimately it defines how your solution is composed of projects. If you implement this diagram (discussed in Chapter 2), you end up with a separate project for each application shown on the diagram, except for the MarketMaker and StockDatabase applications, which cannot be implemented.

It's no accident that we discussed service-oriented architecture (SOA) immediately before we introduced this designer, because it is biased very much toward designing service-oriented applications. While you'll find good support for adorning applications with Web service endpoints, you'll find no out-of-the-box support for adding .NET Remoting endpoints or COM endpoints as alternative communication mechanisms.

Logical Datacenter Designer enables you to define one or more deployment architectures in terms of communication boundaries, logical servers, and the protocols that interconnect them (see Figure 1-4 for an example taken from our StockBroker case study). 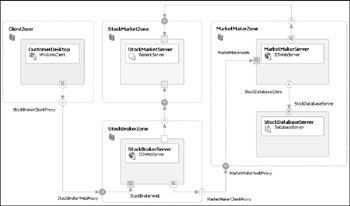 You can have as many logical datacenter diagrams as you like, and the diagrams may be moved freely between solutions.

We cover System Designer and Deployment Designer together because it makes little sense to show you one without the other. In fact, even in the simplest case of defining a default deployment scenario straight from an application diagram (as you'll see in Chapter 2), a system is created implicitly.

The two design diagrams described so far provide two alternate views of the overall architecture. The application diagram represents a solution-scoped view of the applications that you have designed, and the logical datacenter diagram represents the operations analyst's view of the logical infrastructure on which the system will be deployed. A deployment diagram depicts a deployment of the applications in a system to the logical servers in a logical datacenter. In essence, the System Designer and Deployment Designer serve to tie the two views together.

At first glance, the design surface of Deployment Designer (see Figure 1-6) looks very much the same as Logical Datacenter Designer. Look closer, however, and you'll see that each of the servers has one or more applications (also taken from the System View) bound onto it. 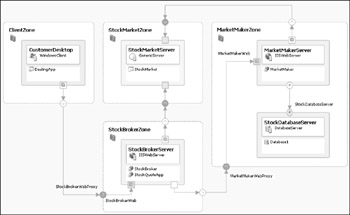 If you mention visual modeling to most software developers, the first thing that will spring into their minds is the UML class diagram that shows how object classes are connected together in a persistent sense or to allow navigation between them. Visual Studio 2005 provides a Class Designer most closely resembling its UML namesake. 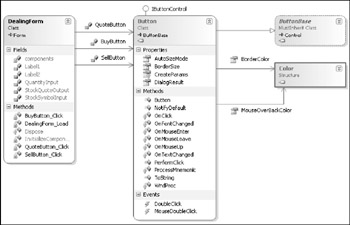 Historically, visual design tools such as Rational Rose were distinct tools, separate from the development tools used for coding. Integration was achieved via a code-generation facility that would produce a one-shot cut of skeleton code as source files that could be loaded up in the IDE. Conversely, existing source files and compiled class libraries could be reverse-engineered into the design tool to document existing code using UML notation.

Some tools—including Rose but excluding Visio EA—provided a degree of round-trip engineering whereby code could be generated from the model in the design tool, modified in the IDE, reverse-engineered back into the model, and so on, ad infinitum. This round-trip engineering was not always as effective as the tool vendor claimed for the following reasons:

A new precedent was set by IBM-Rational XDE, which keeps the two views—model and code—perfectly synchronized with no need to explicitly generate code or reverse engineer. Any changes you make in code are automatically reflected in the model, and vice-versa.

That is the approach taken by Class Designer, which means you won't find any feature labeled "generate code" or "reverse engineer." They're simply not needed. We'll discuss this further in Chapter 5, but for now the main implications of this are as follows:

Crystal Reports 9 on Oracle (Database Professionals)
Certified Ethical Hacker Exam Prep
C++ How to Program (5th Edition)
Making Sense of Change Management: A Complete Guide to the Models, Tools and Techniques of Organizational Change
Microsoft WSH and VBScript Programming for the Absolute Beginner
What is Lean Six Sigma
flylib.com © 2008-2017.
If you may any questions please contact us: flylib@qtcs.net
Privacy policy
This website uses cookies. Click here to find out more.
Accept cookies