The SMTP-based message transport uses several different components to ensure reliable and efficient message delivery. Perhaps the best way to explain these components is to examine the flow of a typical message, as shown in Figure 6.1. 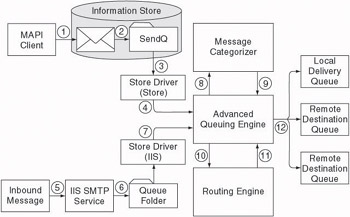 The remaining message flow steps are described in Section 6.2.3.

The remaining message flow steps are described in the next section.

Regardless of how a message enters the system, at some point it is passed to the Advanced Queuing Engine. The Advanced Queuing Engine is the heart of the Exchange transport and all messages are processed by it. This is a change from Exchange 5.5 where 'local' messages (i.e., messages where the sender and recipient are on the same system) were handled entirely by the Information Store without involving the message transport. This change to handle all messages in the same manner allows custom event sinks to be used on all messages, including local messages.