The HP NonStop Remote Database Facility (RDF) subsystem works with the TMF components of the NonStop TMF subsystem. The NonStop RDF subsystem replicates one or more local databases to a remote node. The remote database can be used for:

Read-only queries on the database to relieve the processing load on the local system.

NonStop RDF software is very flexible. Multiple systems can be replicated to a single system. A single system can be replicated to multiple systems. Systems can be configured as reciprocal backups for each other. It is even possible to replicate one system to two systems, which can then be synchronized to provide full NonStop RDF protection even during outages.

There are three versions of the NonStop RDF product:

The RDF components are (See Figure 6-8): 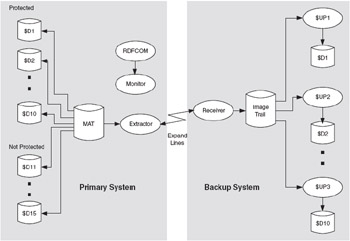 These programs allow users to interact with the NonStop RDF subsystem:

RDFCHEK is used to compare two files, subvolumes or volumes . It checks record- for-record equality along with file attribute equality. Enscribe files and SQL tables can be compared, with SQL field definitions driving the comparison ”no Enscribe DDL is used.

RISK RDFCHEK is a reporting program only; it does not display any data. It poses no risks.

Display status of database activity on the primary system

Display the status of NonStop RDF processing on the backup system.

RISK RDFCOM has many potentially destructive commands, most of which can only be run by a member of the SUPER Group.

The RDFSCAN program is used to examine the RDF Log File.

RISK RDFSCAN is a reporting program only; it does not display any data. It poses no risks.

The RDFSNOOP program is used to examine the NonStop RDF Image File records pointed to by RDF exception files.

Only members of the SUPER Group can use RDFSNOOP to READ image files.

RISK RDFSNOOP displays any data contained in the image trails.

The object file for the Receiver Process is RDFEXTO.

The Monitor Process runs on the primary system. It coordinates RDF Subsystem starts and stops, messages and NonStop SQL/MP DDL operations using the WITH SHARED ACCESS option on protected volumes, and monitors the other RDF processes.

The object file for the Monitor Process is RDFMONO.

AP-PROCESS-RDF-01 The Monitor Process must run as the same userid that issues the START RDF command.

The Purger Process purges image files as soon as it determines that they are no longer needed.

The object file for the Purger Process is RDFPRGO.

AP-PROCESS-RDF-02 The Purger Process must run as the same userid that issues the START RDF command.

The Receiver Process runs on the backup system. It accepts the filtered audit information from the Extractor Process, sorts the information and writes it to the appropriate NonStop RDF Image Trail.

The object file for the Receiver Process is RDFRCVO.

AP-PROCESS-RDF-03 The Receiver Process must run as the same userid that issues the START RDF command.

Each updater performs the following functions:

Reads from the NonStop RDF image file and searches for image records associated with the updater's volume on the primary system.

Sends information to RDFCOM for use in the STATUS RDF command display.

For Enscribe files only, performs the following DDL operations:

For SQL files only, the updater performs the PURGEDATA DDL operation.

The updaters are multithreaded processes. The two most prominent threads are:

Read and queue audit for submittal to the disk process.

Handle replies from the disk process and submit audit to it.

AP-PROCESS-RDF-04 The Updater Process must run as the same userid that issues the START RDF command.

The following files are created by the NonStop RDF subsystem and used by NonStop RDF processes:

The NonStop RDF Configuration File contains all configuration parameters set via RDFCOM. It is a relative file. The file resides on both the primary and backup nodes.

The RDF Context File is maintained by the RDF processes. It contains information that tells the subsystem where each RDF process stopped .

There is a separate context file on the primary node and the backup node. On both nodes, the context file is named $SYSTEM.<rdf-subvol>.CONTEXT.

The NonStop RDF subsystem writes entries to an RDF log file, and also to a log device such as a printer or console. If either the log or the device is unavailable, the messages are logged to $0 as well. RDF messages are generated when:

The NonStop RDF subsystem is initialized

The NonStop RDF subsystem is started or stopped

Control switches from the primary to the backup database

NonStop RDF image files are unstructured files that contain logical audit record images and commit-abort records. Image files exist on the backup node. Image files exist solely for use by the NonStop RDF Receiver and Updater Processes. The files should never be explicitly opened by users for any reason, including backup to tape. Once the Receiver has processed the image file, the file is no longer needed (except in the case of Triple Contingency).

The RDFVOLUME parameter specifies which volume on the backup system will contain the receiver's master image trail.

The file naming convention for image trail files is $volume.<rdfsubvol>.AAnnnnnn, where n is a digit. For example, the first image file might be $DATA01.RDF.AA000001.