Assessing Where You Stand

Assessing Where You Stand

The second baseline capability that is key to influencing others is an understanding of how you deal with conflict. This entails being crystal clear on where you stand in terms of the two personality dimensions of assertiveness and cooperativeness.

Assertiveness is the extent to which a person attempts to satisfy his or her own needs. We've already gone into considerable detail about the importance of knowing where your behavior falls on the continuum from nonassertive to assertive to aggressive . Cooperativeness is the extent to which an individual attempts to satisfy another person's needs. When you look at these two basic dimensions of behavior in conjunction with one another and assess the degree of balance that exists between the concern for oneself and for others, it becomes possible to identify five distinct methods that people employ when dealing with conflict.

The Thomas-Kilmann Conflict Mode Instrument [1] in Figure 5-2 is a graphic representation of these five methods. 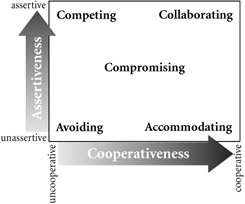 Thomas and Kilmann define each method as follows :

With these methods in mind, take a few moments to decide where on the model your workplace behavior generally falls. Then, think about the reaction this behavior provokes in others ”and the effect it has on your ability to work harmoniously with them:

The answer to the last question in the sequence separates superior conflict managers from the rest of the lot. If your answer was yes, you are indeed rare. Few people are able, without training, to cooperate without giving in, to assert themselves without stepping on toes ”in short, to honor other people's needs without sacrificing their own.

The two baseline capabilities that we described are essential tools in all conflict situations. But every conflict situation in the workplace poses unique challenges and, therefore, requires situation-specific skills. Let's examine these skills in some detail.

Coach Yourself to Win: 7 Steps to Breakthrough Performance on the Jobu2026and In Your Life

Getting Things Done: The Art of Stress-Free Productivity