According to Aboulafia et al . [ABO 01], three levels of emotions may be distinguished, which differ through their intensity and duration. Firstly, the affect relates to an intense emotional state of relative short duration (a few seconds) which calls upon short-term memory. Secondly, emotion characterises emotional states which go beyond the situation which triggered them. Consequently, they call upon episodic memory since they exceed the duration of storage of sensorial memory. Finally, the sentiments are associated with emotional states which relate to the history of the individual, his beliefs, social or religious choices, etc. and form part of his personality. For their part they call upon the long term memory (which is commonly known as memory).

Thus, when we speak of emotion in MMIs, through the accurate definitions provided by Aboulafia et al. , we note that we are misusing language and that it would be better to speak of affect in the MMIs, since studies in this field are still just in their infancy. However, as this term conveys less of a common meaning and is less of a trigger of dreams, it is extremely little used and discarded in favour of emotions.

2.2 The nature of emotions

From ancient Greek times where nomos (rules or reason) and physis (nature, impulsiveness, emotions) were in conflict, and up to the middle of the 20 th century, the emotions were studied very little, since they constituted an uncontrollable variable in experimentation which was likely to falsify subjective and behavioural data [RUSI 01]. Moreover, in popular language a significant number of proverbs or sayings invoke the impulsive and uncontrollable nature of the emotions [DESP 01], one of the most famous of which is doubtlessly that of Pascal: "The heart has its reasons which reason does not know".

However, this is viewed totally differently today, and psychologists such as Izrad [IZR 77] even argue that the emotions form the physiological base on which the perceptive processes (one does not see and hear the same thing, depending on one's emotional state), the cognitive processes (one does not remember the same elements of an image depending on its emotional charge) and action (fear, through the release of adrenalin which, for example, will trigger the action) are organised.

The trend is totally reversed today. Emotions are a subject that has been frequently studied by psychologists since the middle of the 20 th century. The "marketeers" also wish to know the emotional impact of advertising on consumers. Studies on emotions have seen, as is often the case in psychology, two opposing chapels of thought which we will be presenting briefly below, using two neologisms, the "categorialists" and the "dimensionalists".

For categorialists , emotions may be grouped in a finite number of categories, with each category itself able to include more subtle sub-categories. Ekman [EKM 84] may be considered to be the principal representative of the categorialists. Through work done on facial emotions, they have demonstrated that it is possible to identify a limited number of mimic arts which express six basic emotions and which can be found in the majority of cultures that exist around the world. These six emotions are represented in a caricatural fashion (see Figure 5.1). They are (from left to right and from bottom to top) anger, fear, surprise, disgust, joy and sadness. Ekman has produced a model of facial animation (the FACS) which provides for seventy units of action, each composed of a group of facial muscles and which enables a synthetic face to express these six basic emotions. 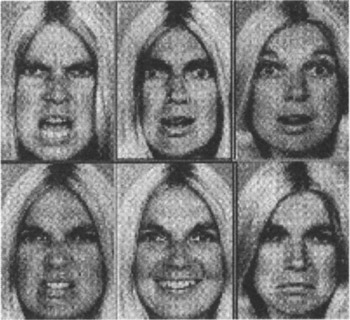 For their part, the dimensionalists consider that all the emotions may be organised in accordance with a limited number of continuous dimensions. Russel and Mehrabian [RUSS 77] thus suggests three basic dimensions; the hedonistic valence of emotion (positive or negative), its intensity and the degree to which the person experiencing it controls it. Figure 5.2 illustrates these three dimensions and places the six basic emotions of Ekman's model in Russel and Mehrabian's three dimensional space. 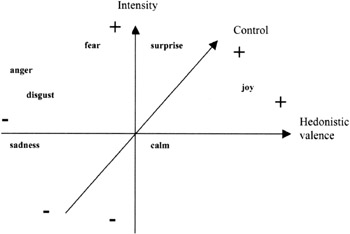 Figure 5.2: The three dimensions of Russel and Mehrabian's model

It cannot be considered that one approach is better than another. In fact, the approach to select for one's own work depends on the objectives and methodologies of measurement that one wishes to use.

For example, a post facto evaluation of the emotion felt by the designation of pictograms (as in the PreEmo [DESM 00]), in the field of automobiles) would be appropriate for a categorialistic approach, whereas an evaluation in real time using electro-physiologic measurement tools (electro dermal conductance , blood pressure, pulse rate, respiration or muscular activity) would be more appropriate to a dimensionalistic approach [DET 01].