As part of her streamlining efforts, Tricia Rosen chose to focus on the "Project Authorization" and "Record and Collect Payment" subprocesses shown in Figure 7, both of which were largely manual processes that operated somewhat independently of the report downloading process. The Appendix shows the Project Authorization Form (PAF) that Tricia filled out for each order received through the DCS. This took her an average of about 15 minutes per order. Other manual operations performed for each order included:

Labor costs for the professionals involved in the subprocesses were estimated at approximately $70 per hour.

To fill out a PAF, Tricia had to receive customer and order information from the data stores shown in Figure 7. These data stores were implemented as tables in a relational database maintained by Greenfield Online. This database was organized according to the Entity-Relationship Diagram (ERD) shown in Figure 8. For a more comprehensive discussion of databases designed to support online stores, see Chapter 14 of Rob and Coronel (2002).

Figure 8: Entity Relationship Diagram of the Database that Supports the Digital Consumer Store

While the Digital Consumer Store's back office operations were thoroughly documented and well understood, they were obviously not as streamlined as they could be. Tricia Rosen decided to focus on the possibility of reengineering and/or automating the manual Project Authorization and Payment Collection subprocesses. As part of her preliminary investigation, she performed a present value (PV) analysis of the costs associated with the manual operations. For the analysis, she was advised to assume a 10% cost of capital. Sales had been averaging approximately six reports per month, and sales volume was expected to increase at an annual rate of approximately 20% for the next three years. While three years may seem like a short time horizon for a PV analysis, Tricia realized that in their e-business environment three years was an eternity; any alternative requiring more than three years to profitability was certain to be rejected by her management. For similarly pragmatic reasons, she chose to ignore any possible intangible benefits, instead basing her analysis solely on the labor cost of processing an order. The following spreadsheet shows a breakdown of the labor cost for the manual system: 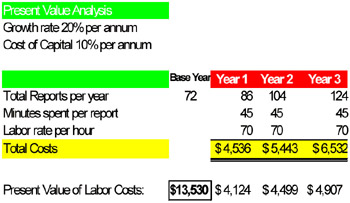 A major assumption underlying the PV analysis is that labor costs are variable—i.e., it assumes that if the subprocesses were automated, the labor costs would be eliminated. However, it was not obvious that this would be the case because all employees involved in the operations were on fixed salaries. In other words, it was not clear that processing one or two DCS orders a week was actually resulting in any out-of-pocket costs.

Even if labor costs were viewed as variable, the cost of automating the subprocesses (estimated by Tricia at $25,000) would be more than the PV of the manual system's costs. This would have also been true under assumptions of growth rates much higher than 20%. If she had had more time, Tricia thought it would have been useful to perform sensitivity analysis, including determination of the sales volume growth rate that would justify full automation based on the PV of labor costs.

Tricia also realized that other issues besides costs had to be taken into account, such as potential effects of back office automation on the integrity of DCS purchase and delivery processes. Automation might also have intangible effects that would be harder to quantify. For example, by reducing the administrative burden of those currently involved in the process, it might allow them to focus more attention on mainline business functions.

Despite these potential benefits, from the preliminary analysis it appeared to Tricia that full automation could not be justified. In deciding not to pursue full automation, Tricia was also very aware that there were many other projects competing for the attention of Greenfield Online's management. The DCS back office was not a high priority within the organization.