Being an electrical utility in the United Kingdom (UK) was not so long ago a peaceful affair. Total regulation and high barriers to entry (high costs associated with building coal-fired or nuclear power stations) were protecting electricity utilities that were producing and distributing power without any competition. However, in the late '80s, three factors marked the end of this era and the beginning of a new one where cut-throat competition and immense uncertainty still define the sector today. The first factor was the over-expansion of the natural-gas industry, leaving producers with surplus capacity. Those producers, who once relied solely on production, were faced with a price of gas below the cost of production, and had for the first time to make up for lost profits through marketing and distribution. The second change factor came in the face of newer and much cheaper power-generation technologies. Small gas-turbine generators cost a fraction of the price of old-fashioned power stations, and could produce electricity at about half the cost. As a result, many utilities had been left with large, uneconomical power plants—and the debt taken on to build them. Arguably, however, the largest shock to the power industry came with deregulation.

Before the privatization initiatives, the Central Electricity Generating Board (CEGB), a public corporation with its own pricing policies and financial targets, carried out the generation and bulk transmission of electricity at wholesale prices. Although CEGB's wholesale price structure—known as the Bulk Supply Tariff (BST)—was the main driving factor for the industry's prices, the CEGB did not set the prices for the main consuming markets of residential, commercial and industrial customers. Only a very few large-scale industrial users (such as British Rail) used to buy electricity directly from the CEGB. The bulk of production output was delivered through the national transmission system, the National Grid (NG), to 12 regional distribution authorities, the Area Boards (ABs).

The overriding philosophy of the privatization program had three main objectives: to widen the ownership of shares amongst the UK population, to reduce to the absolute minimum the level of state funding, and to stimulate the internal or operational efficiency of the industries themselves (Weyman-Jones, 1989). The industrial restructuring and privatization program, which began in 1990, saw the non-nuclear part of the generation industry split into the effective duopoly of two companies, who were jointly given 75 percent of the market. During this initial stage of privatization, the British Government divested 60 percent of its shareholding in each company, and floated the remaining 40 percent in March 1991. Thus, created from the break-up of the CEGB, these two major electricity companies found themselves supplying power to the NG, in competition with other suppliers such as Électricité de France and others (Figure 1). NG was jointly owned and operated by the then also privatized twelve ABs who in turn sold electricity to their local industrial, commercial and residential customers. 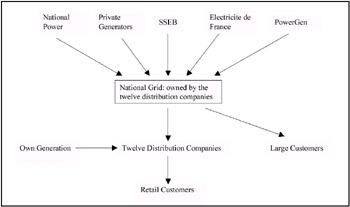 Figure 1: Post Privatization Structure of the Electricity Supply Industry in the UK (Adapted from Weyman-Jones, 1989)

The structure of this post-privatization electricity market was centered on a spot-market known as the Pool (Thomas, 1991). The mechanics of the Pool were thus: each power station was like a casual worker who quoted a price for his labor according to parameters such as the price of fuel, internal economics, and so forth. Each quote covered half an hour's generation. The NG—whose job was to manage the Pool—listed the quotations for each half-hour throughout the day in order of increasing cost and the cheapest bidder on the list was called upon to deliver electricity. With increasing demand, the NG called on the next most expensive power station to contribute.

Perhaps a glimpse of future as far as competition was concerned was given by the government's commitment to nuclear power as the main form of energy. A fixed percentage (close to 25 percent) of UK power had to be supplied from nuclear sources by the year 2000 with the ABs required to take this percentage from nuclear stations by that year. In short, the privatization initiatives resulted in a fundamental reorganization of the electricity market and supply chain that the industry had not seen in at least 40 years.