An excellent way to disrupt task flow and annoy your site's users in the process is to let them get several steps down a path toward their goal and then tell them, after they've invested time and effort, that what they told you several steps ago that they want isn't available.

For example, someone I know recently used TicketMaster.com to try to order tickets for a performance. He indicated the number of tickets he wanted, the section of the theater he wanted to sit in, among other information. The site responded "Sorry. No tickets available in this section." He repeated the process several times, specifying different sections of the theater. Each time it said the section was full. A phone call to TicketMaster revealed that the entire show was sold out. Instead of telling its customers that the concert was completely sold out, TicketMaster.com lets them waste valuable time on dead-end paths.

People who order Internet service from EarthLink may find themselves hitting a dead end when they attempt to use its customer-service website. When customers try to check the status of their DSL order, the site dutifully displays its Order-Status checking form and allows them to fill it out (Figure 2.29[A]). Only after users have taken the time to read the form, look up their new DSL phone number and EarthLink work-order number, type them into the form, and submit it does the site bother to check whether the work-order status back end is available. If not, it displays, "The DSL Work Order Status page is temporarily unavailable at this time" (Figure 2.29[B]). We will ignore the redundant wording of this message and focus on the problem that it simply comes one step too late. The previous page is where the message should have appeared so users wouldn't have to waste time filling out the form. 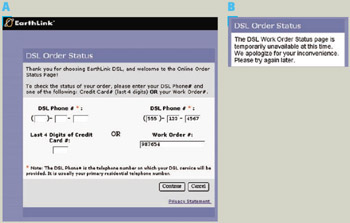 At both TicketMaster.com and EarthLink.net, how to avoid the blooper is obvious. Users should have been notified of the unavailability-of any concert seats in one case; of order status checking in the other-as soon as they indicated what they wanted to do. An example of how the EarthLink DSL Order Status page should have appeared is shown in Figure 2.30. 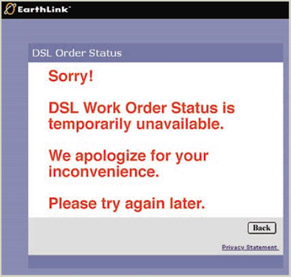