Rise of the Web: Everybody Who Creates a Website is a Designer

The meteoric rise in popularity of the Web immensely broadened access to information-and misinformation .

Most relevant to this book, the rise of the Web has thrust many people into the role of user -interface designers ... for better or worse . Furthermore, this trend will continue. Although the dot-com crash of 2001 slowed the growth of the Web, it did not stop it. At the time of this writing (mid-2002), credible estimates of the total number of websites vary tremendously-from about 10 million to 150 million-because of differences in how a "website" is defined. [2] Nonetheless, Web analysts agree that whatever the number of websites is, it is still growing.

Every one of those websites was designed by someone. As Nielsen has pointed out (Nielsen, 1999a), there aren't enough trained user-interface designers on Earth to handle the number of websites that go online each year. Thus most sites are designed by people who lack training and experience in interaction and information design and usability. Put more bluntly: Everyone and his dog is a Web designer, and almost no one has any user-interface or interaction design training. 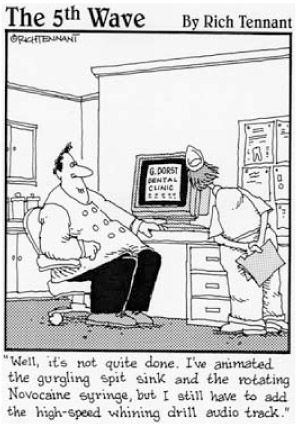 [2] Depending on who is counting, a "website" is defined as a registered domain name , a home page, or a Web server that responds. Obviously, the number of sites counted depends on which criterion is used. Web analyst Jakob Nielsen suggests that the most credible estimate is the NetCraft survey: www.netcraft.com/survey/ . In mid-2002, using a criterion based on responding Web servers, NetCraft estimated 37.5 million websites.