The two services that allow you to set up one centrally managed database of usernames and passwords for Linux and Unix computers are NIS and LDAP. With each of these services, you can maintain one password database on an NIS or LDAP server and configure the other systems on the network as clients. When a user logs into an NIS or LDAP client, that system first checks its local password file, usually /etc/passwd. If it can't find your username, it looks up the corresponding file on the server.

In the Red Hat Exam Prep guide, the only requirement is to be able to connect a client to a network directory service, such as NIS or LDAP. As of this writing, the prep course outline for the RHCE (RH300) no longer includes NIS server configuration requirements. I therefore focus on NIS and LDAP clients in this section.

First, I'll show you how you can configure NIS and LDAP clients using the command line interface and then use the Red Hat Authentication Configuration tool.

It's fairly simple to configure an NIS client on a network. Assuming you have an NIS server, you need to do three things. First, specify the server and domain name in /etc/yp.conf. Next, make sure the ypbind client service starts the next time you boot Linux. Finally, make sure the /etc/nsswitch.conf file looks to the NIS service for at least the username and password database.

Making sure that the ypbind client service starts the next time you boot Linux is a simple matter. Just as with other Linux services, you can make sure it starts at the appropriate runlevels with a command such as the following:

If you want to start the service immediately, the following command should be familiar:

Finally, making sure your computer looks for the NIS server for key files means modifying the /etc/nsswitch.conf configuration file. For example, to make sure your computer looks to the NIS server for the username and password database, you'll want to configure the following commands in that file (you can add other services such as ldap to the list):

This assumes that you're using the NIS server that's included with RHEL 5, NIS version 2.

One command you need to know about when running an NIS client is yppasswd. All users can manage their NIS password with this command.

If you want to configure your RHEL computer as an LDAP client, you'll need the openldap-clients, openldap, and nss_ldap RPM packages. The openldap-clients RPM is a default part of the System Tools package group. The other two packages should be installed by default on your RHEL system.

To configure an LDAP client, you'll need to configure two different ldap.conf configuration files in the /etc and the /etc/openldap directories. While both files can get quite complex, for the purposes of the exam, I'll keep the definitions simple.

The default version of the /etc/ldap.conf file includes a number of different commands and comments. To set up your LDAP client, you'll need to be concerned with several commands in this file, including those described in Table 6-8.

You'll need to specify the HOST and BASE variables in this file, just as you did in the /etc/ldap.conf configuration file. Based on the parameters in the previous section, this leads to the following two commands:

If your LDAP server is not on the local computer, and your domain is not example.com, you'll need to substitute accordingly. Individual users can supersede this file in a hidden .ldaprc file in their home directories.

The Name Service Switch file, /etc/nsswitch.conf, governs how your computer searches for key files such as password databases. You can configure it to look through NIS and LDAP server databases. For example, when an NIS client looks for a computer host name, it might start with the following entry from /etc/nsswitch.conf:

This line tells your computer to search through name databases in the following order:

You can configure the /etc/nsswitch.conf configuration file to look at an LDAP server for the desired databases. For example, if you want to set up a centralized username and password database for your network, you'll need to configure at least the following commands in /etc/nsswitch.conf:

You can configure a number of additional files in an LDAP or NIS centralized database; however, the details are beyond the scope of this book. 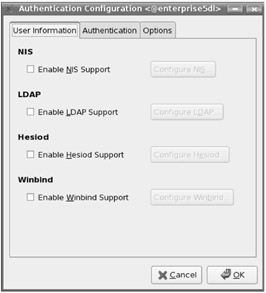 If you've gone through the First Boot process described in Chapter 2, you may have already configured your computer using this tool. You can set your computer to check an NIS and an LDAP server for usernames and passwords.

If you choose to activate the Enable NIS Support option, click the Configure NIS button. You'll need to enter the name of the NIS domain, as well as the name or IP address of the computer with the NIS server. Make any desired changes and click OK.

If you choose to activate the Enable LDAP Support option, click the Configure LDAP button. Make any desired changes and click OK. You'll need to enter the following information:

Once you've made your changes, click OK; it may take a few seconds for the Authentication Configuration tool to write the changes to the noted configuration files before it closes. If you've set up an NIS client, it automatically sets the ypbind service to start at appropriate runlevels the next time you boot Linux.