When you encounter problems, proceed calmly. If you've read this book thoroughly, have the requisite experience, and do not panic, you'll usually be able to identify the cause of a problem fairly quickly.

If you can't identify the cause right away, try the simplest solutions first. They take less time and are less likely to sabotage your system.

If you have to go into more detail, remember the seven basic steps of the scientific method (as defined in Wikipedia). They can be applied to the Troubleshooting and System Maintenance portion of your Red Hat exam. If you have experience, you may be able to jump to a solution at any of these steps.

As described in the Red Hat Exam Prep guide (www.redhat.com/training/rhce/examprep.html), there are Troubleshooting and System Maintenance requirements for both the RHCT and RHCE exams. To qualify as an RHCE, you need to complete all RHCT requirements during the first hour of the exam. These requirements can fall into the following categories:

To qualify as an RHCE, you also need to complete enough of the RHCE requirements for an overall score of 80%, which can fall in the following categories:

The network service issues you may encounter may include one or more of the services described throughout this book, including Apache, Samba, NFS, FTP, Squid, sendmail, Postfix, Dovecot, SSH, DNS, and NTP.

Two places where you are likely to make errors that result in an unbootable system are in the boot loader and init configuration files, /boot/grub/grub.conf and /etc/ inittab. For example, identifying the wrong partition as the root partition (/) can lead to a kernel panic. Other configuration errors in /boot/grub/grub.conf can also cause a kernel panic when you boot Linux. Whenever you make changes to these files, the only way to fully test them out is to reboot Linux.

As a Red Hat Enterprise Linux administrator, you will be expected to know how to fix improperly configured files related to the boot process. For this reason, a substantial portion of the exam is devoted to testing your troubleshooting and analysis skills.

The following scenarios and solutions list some possible problems and solutions that you can have during the boot process, and possible associated solutions. It is far from comprehensive. The solutions that I've listed work on my computer, as I've configured it. There may be (and often is) more than one possible cause. These solutions may not work for you on your computer or on the Red Hat exams. To know what else to try, use your experience.

To get the equivalent of more experience, try additional scenarios (remember: never do these things on a production computer). Once you're familiar with the linux rescue environment, test these scenarios. These scenarios worked as shown when I tested them on RHEL 5. However, they lead to different errors on RHEL 4 and RHEL 3.

For the first scenario shown, change the name of the grub.conf file so it can't be loaded. Reboot and see what it does on your system. Use the linux rescue environment to boot into RHEL and use the noted solution to fix your system.

For the second scenario shown, overwrite the MBR; on a SATA/SCSI drive, you can do so with the following command (substitute hda for sda if your system uses an IDE/PATA drive):

The third scenario is misleading; it's what happened when I overwrote my /bin/ mount command with /sbin/mount.nfs and rebooted.

The fourth scenario is what happened when I overwrote my /bin/init command.

The fifth scenario is based on a missing /etc/inittab; I suspect it's much more likely that you'll see some major error (such as a key command, commented out) in that file.

The sixth scenario results in the messages shown in Figure 16-1, which happened when I set the default runlevel to 3 and commented out the commands with the mingetty directives in /etc/inittab. 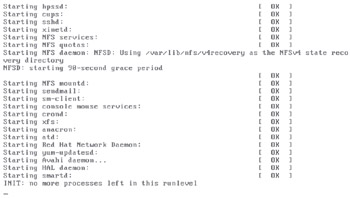 The seventh scenario is based on a typo in the root directive in /boot/grub/grub. conf, which results in the messages shown in Figure 16-2.

Sometimes, you may run into a problem with the default runlevel. But you're not stuck. There are two ways to boot into different runlevels. You can boot directly from the GRUB configuration menu, or you can boot into the linux rescue environment from the first RHEL installation CD.

The Red Hat Exam Prep guide states that "RHCTs should be able to boot systems into different run levels for troubleshooting and system maintenance." This is straightforward; at the boot loader prompt, you can start Linux at a different runlevel. This may be useful for two purposes. If your default runlevel in /etc/inittab is 5, your system normally boots into the GUI. If you're having problems booting into the GUI, you can start RHEL into the standard text mode, runlevel 3.

One other option to help rescue a damaged Linux system is single-user mode. This is appropriate if your system can find at least the root filesystem (/). Your system may not have problems finding its root partition and starting the boot process, but it may encounter problems such as damaged configuration files or an inability to boot into one of the higher runlevels. When you boot into single-user mode, options are similar to those of the standard linux rescue environment described later in this chapter. Other runlevels shown in Table 16-1 may be useful in specialized circumstances.

To boot into a different runlevel, first assume that you're using the default RHEL boot loader, GRUB. In that case, press (lowercase) p to enter the GRUB password if required. Type (lowercase) a to modify the kernel arguments. When you see a line similar to

add one of the following commands (shown in boldface) to the end of that line:

You can use the same technique to boot into another runlevel. For example, to boot from the GRUB boot loader into runlevel 3, navigate to where you can modify the kernel arguments, and add the following command to the end of the following line:

When you boot into runlevel 1, no password is required to access the system. As you'll see later in this chapter, running your system in this runlevel is somewhat similar to running a system booted in rescue mode. Many of the commands and utilities you normally use are unavailable. You may have to mount additional drives or partitions and specify the full pathname when running some commands.

When you have corrected the problem, you can reboot the system. Alternatively, you can type the exit command to boot into the default runlevel as defined in /etc/ inittab, probably runlevel 3 or 5.

In brief, you can boot even an unbootable system using the linux rescue environment. Using the first RHEL installation CD, type linux rescue at the boot: prompt. The first couple of steps are the same as those for installing RHEL 5. If the linux rescue environment detects your system, it may mount the standard directories in /mnt/ sysimage subdirectories in read-write or in read-only mode. If your filesystems are not mountable, you can open a command prompt and continue with your troubleshooting. 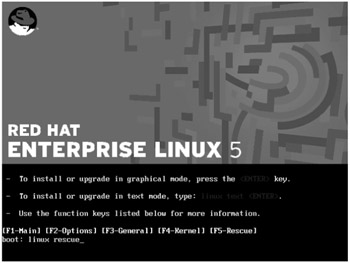 The RHCE portion of the Red Hat Exam Prep guide explicitly states that you need to know how to use the rescue environment provided by the first RHEL installation CD. 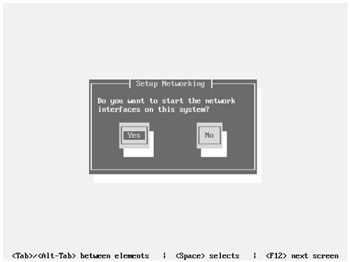 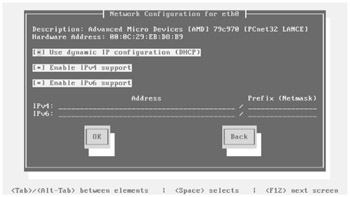 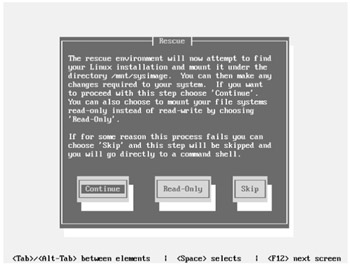 Not all of your filesystems may mount properly. You may see error messages such as:

This suggests that at least one of the filesystems listed in /etc/fstab isn't mounting properly for some reason. If the linux rescue environment has no problems, you'll see a message noting that your system has been mounted, as shown in Figure 16-7. 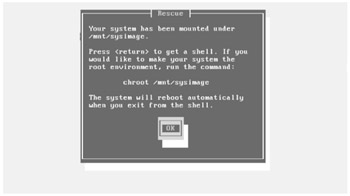 Figure 16-7: The linux rescue environment has found your root directory (/).

Select OK. You should see the following prompt messages:

You'll use the chroot /mnt/sysimage command shortly. Now you can work on repairing any files or filesystems that might be damaged. First, check for unmounted filesystems. Run a df command. The output should look similar to Figure 16-8.

Compare the result to the /mnt/sysimage/etc/fstab configuration file. If some filesystem is not mounted, it may be configured incorrectly in the fstab file. Alternatively, the label associated with a partition may not match the filesystem shown in your fstab file. For example, to find the label associated with /dev/sda1, run the following command:

This should return the name of a filesystem to be mounted on that partition such as /boot.

Sometimes an unmounted filesystem just needs a little cleaning; remember, a command such as the following cleans the /dev/sdb1 partition:

The fsck command works only on an unmounted filesystem. For example, if you get a message such as:

unmount the subject filesystem with a command such as umount /mnt/sysimage/boot. If that doesn't work, restart the rescue process. When you get to the screen shown in Figure 16-6, select Skip and read the "No Mount linux rescue Environment" section later in this chapter.

This is presented when the partition, in this case /dev/hda2, is part of a Logical Volume Manager (LVM) array as described in Chapter 8. In that case, you'll need to review your /mnt/sysimage/etc/fstab file for the appropriate logical volume (and unmount it), before trying to apply the fsck command to it.

Remember the message in Figure 16-7? It includes an important clue. All you need to do to restore the original filesystem structure is to run the following command:

When you select the Read-Only option shown in Figure 16-6, you'll get the same basic prompt. There is little difference between regular and read-only rescue mode. The rescue system attempts to do everything that it would under regular mode, except all partitions associated with your standard system are mounted read-only. (Some of the rescue system filesystems are still mounted as read-write.)

This is appropriate if you have a large number of mounted filesystems; it can help you cull through what is and isn't working with less risk of overwriting key configuration files.

When you select the Skip option shown in Figure 16-6, the rescue environment doesn't even search for a Linux installation. A minimal root image is loaded into a RAM disk created by the kernel, and you're taken to a root shell prompt (#), as shown:

At this point, you have access to a basic set of commands. You can mount filesystems, create directories, move files, and use editors such as vi. As nothing from your physical drives is mounted, you can apply the fdisk and fsck commands to various hard disks and partitions. A few other basic commands are also available.

The great difficulty in operating from the rescue environment is that you are working with a minimal version of the Linux operating system. Many of the commands you are accustomed to having at your disposal are not available at this level. If your root partition has not been completely destroyed, you may be able to mount this partition to your temporary root directory in memory and access commands from there.

But you may need a little help identifying the partitions on your system. As I'll show you shortly, the fdisk -l /dev/hda command lists the configured partitions on the first IDE hard drive. You can create a new directory such as /mnt/sysimage, mount a partition such as /dev/hda2 on that directory, and check the result with the following commands:

If you can verify that you've mounted the standard root directory (/) filesystem on the /mnt/sysimage directory, you can run the chroot /mnt/sysimage command. You can then have full access to the commands and configuration files available under that mounted partition.