Some fonts should never be used in a PowerPoint presentation. These are the fonts that do not scale well, too decorative to read, too light and don't have fully defined character sets. Let's look at some examples for each.

Some fonts don't look as good in small sizes as they do in larger sizes. Other fonts look quite nice when used in smaller sizes, such as for on-screen use, but do not display well via a projector or large-screen monitor. Two fonts that show this quite well are Vivaldi and Blackadder ITC: 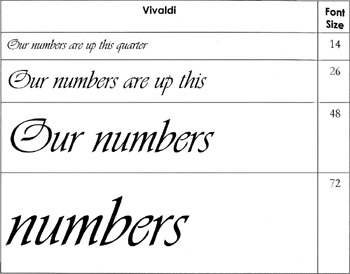 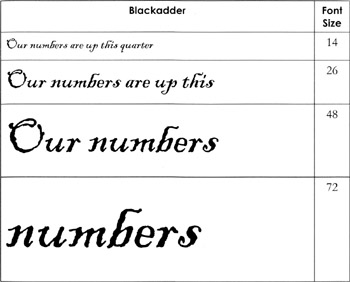 Blackadder looks nice when printed using small to medium character sizes. However, the larger this font gets, the more the jagged edges show. If you have this font on your system, type in a few lines of text using the font. Notice the spacing on the lines is greater and greater as the font size grows, but not in proportion with the size of the letters .

Fancy fonts are harder to read than simple fonts. They are great to use for emphasis and punch, but should never be used for the main text of a presentation.

Test it out. Which of the following two fonts are easier to read?

Now, take that example even further. Imagine the participants ' frustration level after trying to read the titles of 50 slides in each of those fonts.

Fonts That Are Too Light

Some fonts are lighter than others. The lighter ones do not project as well, making it harder for participants to read. This also impacts how the font looks on a non-white background.

While all of the examples here have been black text on a white page, the problems with lightweight fonts can be seen even more drastically when viewed as colored text on a dark background. Try it and see.

Most fonts created and sold today have a full complement of small letters, capital letters, numbers and special characters. However, there are still a significant number of fonts are missing some of the lesser used characters.

This happens most drastically with display fonts and special character fonts. However, it can also happen with font sets that only have capital or small letters defined.

In the case of PipeDream, the only defined characters are uppercase letters, numbers and basic punctuation. Lowercase letters and special characters were not defined by the font designer.

Some fonts on your system may not be installed on other systems. Beware that embedded fonts can be harder and slower to print. If the target printer needs to download the font from information in the presentation, it may take longer to print.