In addition to conditional statements like if/else and switch, PHP also supports loops.

Looping with the for loop

The for loop, which repeatedly executes a statement, looks like this in PHP:

Here’s an example, for.php. In this example, the code uses a for loop to display a line of text six times. The loop starts by setting a loop counter variable named $loop_counter to 0, incrementing it each time after the loop runs, and testing to make sure the loop counter doesn’t exceed 6:

Then you add the body of the loop, which is what displays the text in the Web page:

The results of this code appear in Figure 12.13, where, as you can see, the text was displayed six times. 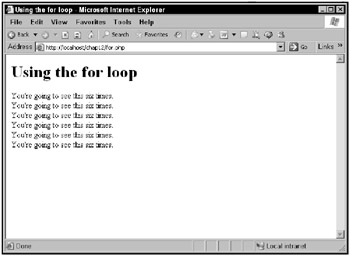