The C-specs are where everything happens. It is therefore important that you understand the workings of the C-specs.

Each C-spec executes an operation (such as add, multiply, read a record, turn off an indicator, or compare two variables for equality). This operation (RPG programmers usually call it "op code") is coded in columns 26–35.

Calculation specs come in three different varieties. This fact may be confusing to the newcomer to RPG, but supporting three different types of calculation specifications is necessary so that the RPG compiler can continue to compile source code that was written before more modern features were introduced.

Traditional C-specs have a rather simple organization. They are divided into a few fields that never vary in meaning or purpose. Here is what the C-spec contains:

IBM began to relax RPG's fixed-format syntax by adding certain free-form areas within the H, F, D, and C specifications. In C specs, this was accomplished by merging columns 39 through 80 into an extended Factor 2. The op codes that support the extended Factor 2, such as EVAL, IF, DOW, DOU, and FOR, must be coded left-adjusted, beginning in Factor 1. The operands of these operations may be coded anywhere within the extended Factor 2 and may continue to subsequent lines.

RPG also permits certain operations to be coded in a completely free-format syntax. A free-format section is introduced by the /FREE compiler directive and is terminated with the /END-FREE directive.

Within a free-format section, the op code is coded first, followed by any of Factor 1, Factor 2, and Result Field. Comments begin with a double slash sequence (//) and continue through the end of the line. The code example in Figure 24.1 illustrates the use of free-format calculations:

Figure 24.1: Calculations may be entered in a free-format syntax.

RPG IV provides several structures you can use for decision making within your program:

Figure 24.2: RPG IV example of IFxx and ELSE specifications.

This code executes the WRITE operation if "CustNbr" is greater than 500. If not, the ELSE operation dictates that the UPDATE operation be executed. The ENDIF marks the end of the decision group.

This example is a modification of one shown in Figure 24.2. The WRITE operation is executed if "CustNbr" is greater than 500 or if "CrdCde" is equal to ‘T.’ In any other case ("CustNbr" less than or equal to 500 and "CrdCde" not equal to ‘T’), the program executes the update operation.

If Factor 1 or Factor 2 is omitted, a value of 1 is assumed. If the Result field is omitted, the compiler uses an internal control variable. 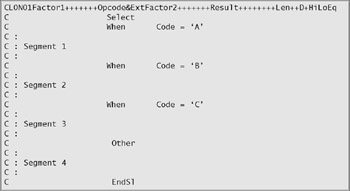 Figure 24.5: RPG IV example of the SELECT and WHENXX specifications.