Before you can choose a backup solution, you must first choose a backup medium. The three most prevalent backup media types are tape , magnetic media (such as a hard drive), and optical media (such as CD and DVD). Each medium has its advantages and disadvantages. For example, magnetic media is definitely inexpensive; just take a look at how much money high-capacity hard drives are running these days. However, keeping in mind that it's a good idea to store completed backup media off-site (preferably in a fire/weather resistant safe), you might find yourself a bit inconvenienced in carrying eight or nine hard drives across the parking lot to the safe each week. Tape drives are definitely high capacity devices and much easier to carry to the off-site location, but the drive mechanism that runs them may be prone to breakdowns. A good tape drive is also an expensive acquisition, as a multi-tape auto-loading mechanism can run thousands of dollars, and that's minus any tapes! Optical media has the advantage of being inexpensive and resistant to magnetic/static forces that can wreck havoc on the other two media types, but it can be slow to run backups and restores , and capacities are not yet as high as the other two media.

For more information on the various types of backup media, check these links:

Windows' native backup utility, simply called ntbackup (or just Backup ), backs up a server's data to a backup set . A backup set can be stored on any supported medium, such as tape or another hard drive. Data is copied from the server being backed up to the backup set where it can be retrieved in the event of an emergency.

There are five types of backup methods that ntbackup uses:

Each of these backup methods differs in the way that the files being backed up are treated. The magic word to remember here is the archive attribute . Right-click any file on any of your Windows servers, choose Properties , and click the Advanced button in the bottom right corner. Notice the checkbox labeled File is ready for archiving . This checkbox is what ntbackup keys off of when it performs the various types of backups listed above. If the box is checked, the file gets backed up. If the box is unchecked, it doesn't get backed up. This checkbox is checked by default on all files, which makes sense as they haven't been backed up yet.

Each of the five backup types reacts to the archive attribute differently.

A normal backup is pretty much what it sounds like, and is the simplest to perform. It backs up everything it touches. This is the type of backup that you might want to start with when you are performing your first backup. Once a normal backup runs, the archive attribute checkbox on all files being backed up is cleared. This simply means that the file has been backed up. The archive attribute stays unchecked until the file in question is modified in any way. Once the file is modified, the box is re-checked. This tells ntbackup that the file has changed, and that it should be backed up again on the next backup session. A normal backup can take a very long time to perform because it is backing up everything it touches. Each time a normal backup is run, the archive attribute on each file is re-checked and then unchecked once the backup completes.

Similar to the copy backup, the daily backup completely ignores the archive attribute (it neither clears nor selects it). However, it backs up only those files that you select and that have changed during the day in which the backup is run.

The following illustration depicts the two most used types of backup. 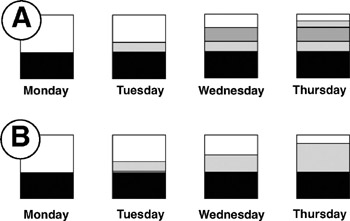 In this tutorial, we back up the denver domain controller (DC02). In order to do this, ensure that you have a separate hard drive (or hard drive partition) connected to DC02. We use this second hard drive to act as our backup media, and we only back up the system drive (C drive).