In your original 3D rotation effect using scaling, you used multiple keyframes and tweens ( alongside changes in scale) to achieve the 3D rotation effect. Here you're going to create the same effect using a motion guide. Most animation programs allow you to draw a path that an object should follow in a given amount of frames . Using a motion guide, or motion path as it is also known, can greatly cut down development time when you need your object to follow an irregular path that has lots of twists and turns. In Flash, you draw a motion path in a special type of guide layer called the motion guide. Motion paths are very powerful animation tools and can easily allow you to create complex animations that would otherwise take many keyframes and lots of tweaking.

You can modify the 3D rotation effects presented here in many ways to create variations and combinations. To do this, create the effects inside a movie clip so you can apply transformations to the whole animation. Turning the animation and scaling it, as well as using multiple instances of it will allow you to create more complex scenes. For a simple example of what is possible, take a look at the sample file sphere_variation.fla from this chapter's examples: 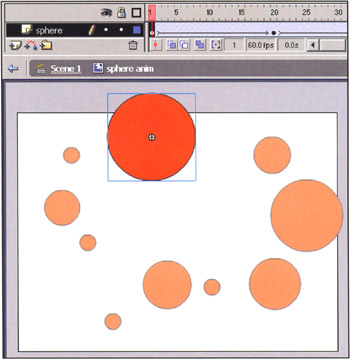