The main characteristic in HTTP communications is that there are two parties to an HTTP transaction:

In Internet terms, the client is commonly seen as a web browser, using mostly HTML and image files, communicating with a web server. However in reality the client possibilities are much wider than the browser. A client is simply the party that initiates the request to the server that processes it and returns a response. The client may in fact be another server, acting as client, requesting a resource of the server. In fact, proxy servers fulfil this role, where a client (possibly a browser) makes a request to the proxy server (in this case acting as server), which in turn acts as a client to the server holding the requested resource indicated by the URI.

Proxy servers are often used in companies with firewalls to monitor and direct HTTP traffic through the proxy to the outside Internet. The diagram below outlines this relationship where there are two sets of HTTP transactions, with the proxy server acting as both server on one side and client on the other side:

In a Java application, similarly this could allow the client to follow up the initial request with subsequent requests, possibly based on the initial response over the same connection.

HTTP is designed as a stateless protocol (i.e. no state was maintained by the server between client requests). However, there are two main methods that servers use to maintain state. The first is URL rewriting (where additional information is included in the URL) and the second is cookies. Cookies allow the server to send small pieces of information to the client for retrieval from the client on subsequent requests. These are not part of the core HTTP specification document but are included as part of the wider specifications in separate documents specifying their uses.

The HTTP requests and responses contain text-based communication in the headers with possibly text (or binary files) in the message body.

A sample HTTP client request for the default index page of website may look as follows:

While the server may respond with:

A blank line follows indicating that the header data is completed and the body of the response, if there is one, will begin; in this case a simple HTML page.

The HTTP client is responsible for initiating the communication with the server. To do this it sends a formatted request and waits for a response from the server. The format of the request is as follows: 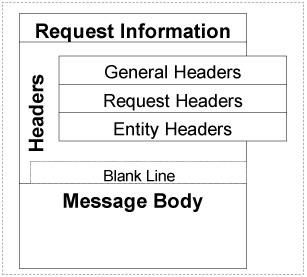 At a minimum the request will include the method request information that is in the following format:

This tells us the method being used to make the request, the URI of the requested resource, and the version of HTTP, such as:

Technically, the Header information is optional but many servers, methods and resources will require some data in various header fields. For HTTP/1.1, at a minimum, the Host header is required as servers may share the same IP address among different web applications on different host URIs so this is the only way they can identify the actual resource requested.

General header information is used in both requests and responses and includes information such as the date, connection or caching information. For example:

Request header information is obviously used only in the request, and is used to specify relevant information about the client for the server such as the data it prefers to receive, any conditions to the request, or the maximum number of times the request can be forwarded. For example:

The blank line always follows the request header to indicate the end of the header information, and possibly the start of the body of the request (if included).

The Body of the request may contain POST method parameters, files PUT on the server, other files, Java data etc.

The initial HTTP/0.9 version only supported the GET method for retrieval of resources. As the "informational" specifications evolved into HTTP/1.0, a number of additional request methods were added with varying support. With the advent of HTTP/1.1 two methods (LINK and UNLINK) were dropped and three methods were added. We will examine each of these methods in the following sub sections.

All of the request methods, except where noted in the relevant subsection, are supported methods of javax.servlet.http.HttpServlet, and are available to Java programmers.

HTTP/1.0 added HEAD and POST methods to the GET method already in use. It also added the PUT, DELETE, LINK and UNLINK methods, but the support from servers and clients for these methods was more patchy.

The GET method, introduced in HTTP/0.9 was the original request method designed to retrieve information, described as an entity, referenced by the request URI. This is, by convention, only a retrieval method and should not change the information or resources on the server.

We can also use conditional GET requests if one or more conditional If- headers are used. If the range header field is used it may be a partial GET, allowing large documents or data to be more efficiently retrieved in one or more pieces.

Both the conditional GETs and the partial GETs are designed to improve efficiency by reducing the unnecessary network traffic to a minimum.

This method is designed to allow the client to send a block of data to the server in the message body of the request. This method may result in a new resource URI being created, for example in the case of a post to a notice board, or may involved the sending of data from a form to the server and/or database for processing.

Essentially in Java terms, programmers can treat the GET and POST methods similarly in certain situations, in that similar form parameters may be submitted though each request method, although the POST request is suited also for other data such as files, XML requests, serialized objects etc.

It is also ideal for HTTP tunneling as we can send Java objects, files and other data in a request to the server.

The PUT request is used to store the body of the request at the requested URI. The body may be a file, or other resource such as HTML or XML data, or even a servlet or JSP, and is in effect similar to the File Transfer Protocol (FTP) in relation to transferring files.

The DELETE method is the converse method to the PUT request. This method allows the client to request that the given resource at the specified URI is deleted, or at least removed to an inaccessible location.

The client is not guaranteed success, even once the response indicating the operation was completed is returned. The server should only return a status code indicating success if, and only if it intends to delete (or already has deleted) the resource at the time of the response.

The LINK and UNLINK methods are only mentioned here because they are mentioned in the HTTP/1.0 document, however they are rarely, if ever used, and should be avoided.

They have been dropped completely from the HTTP/1.1 specifications and are not supported request methods in Java servlets (javax.servlet.http.HttpServlet). Of course this class and/or the Servlets API could be extended to support these methods, but this is not advisable.

The HTTP/1.1 specifications define three additional, new methods. One is not implemented yet, while the other two may be more useful to client side developers.

Remember here that when we talk about client-side and client applications this also applies to proxy servers or other servers (in other words Java web applications are included) that need to access external HTTP resources acting as a client in these HTTP conversations.

The OPTIONS method is most useful to the client side developer as it allows the client to determine the options or methods available from a given resource URI on a server. If the request URI is an asterisk, the OPTIONS method applies to the server in general instead of a specific URI resource.

For Java programmers the doOptions() method in HttpServlet need not be overridden, as it will automatically detect the available methods in normal operation. The only reasons for overriding this method are if the servlet has reason to hide a specific method available, or if the servlet extends or implements additional methods beyond those already available.

This HTTP request method could be useful in client applications accessing new or dynamic resources, or if the client is trying to access resources that may not support all of the current HTTP methods.

The TRACE method simply should return the header information received by the server, back to the client in the body of the response. This is used to allow the client to see exactly what the server received and its primary use is for debugging. This method never includes a body or entity header fields in the request and the response is of the Content-Type message/http with the request in the body.

For Java programmers the doTrace() method in HttpServlet implements this HTTP method and should not be overridden on the server side. The Java client side may use this request for debugging purposes.

This CONNECT method is not yet implemented, and is reserved by HTTP/1.1 for use with a proxy server that can dynamically switch to being a tunnel.

This method is not implemented in javax.servlet.http.HttpServlet and is not available to the Java programmer yet.

The structure of the servers response is similar to the client request with two main differences - the response information line and the response headers: 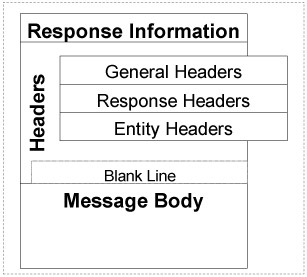 The Response information includes the HTTP version of the response, the status code indicating the result of the request and the message associated with the status code:

This line indicates the request was processed successfully:

While the following is an example of where the requested resource was not located:

General headers are used by both request and response and the following is an example of them from a response:

Response headers are specific to the server response and are used to include server-specific information such as cookie setting, or authentications:

Similar to requests, Entity headers in responses indicate information about the body of the request:

As we outlined before, there are four types of HTTP headers. General headers and Entity headers are used in both the request and response, while Request and Response headers may only be used on the relevant side of the communication.

The subsections below detail the headers from HTTP/1.0 and HTTP/1.1, and include the additional standard headers for authentication and cookie management.

For each header, the column Since indicates when the header was introduced. As shown, some existed only for HTTP/1.0 and were not included in the HTTP/1.1 specifications: