SQL Server 2000 is a family of products designed to meet the data storage requirements of large data processing systems and commercial Web sites, as well as meet the ease-of-use requirements of individuals and small businesses. At its core, SQL Server 2000 provides two fundamental services to the emerging Microsoft .NET platform, as well as in the traditional two-tier client/server environment. The first service is the SQL Server service, which is a high-performance, highly scalable relational database engine. The second service is SQL Server 2000 Analysis Services, which provides tools for analyzing the data stored in data warehouses and data marts for decision support.

The traditional client/server database environment consists of client applications and a relational database management system (RDBMS) that manages and stores the data. In this traditional environment, the client applications that provide the interface for users to access SQL Server 2000 are intelligent (or thick) clients, such as custom-written Microsoft Visual Basic programs that access the data on SQL Server 2000 directly using a local area network.

The emerging Microsoft .NET platform consists of highly distributed, loosely connected, programmable Web services executing on multiple servers. In this distributed, decentralized environment, the client applications are thin clients, such as Internet browsers, which access the data on SQL Server 2000 through Web services such as Microsoft Internet Information Services (IIS).

Figure 1.1 illustrates each of these types of clients accessing SQL Server 2000. 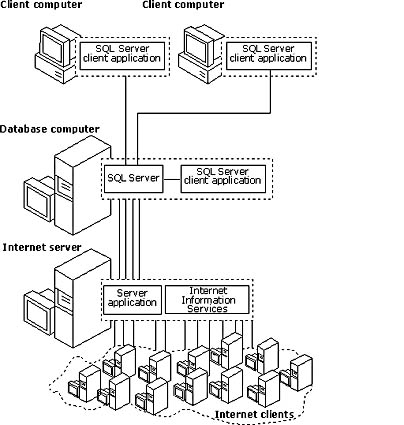 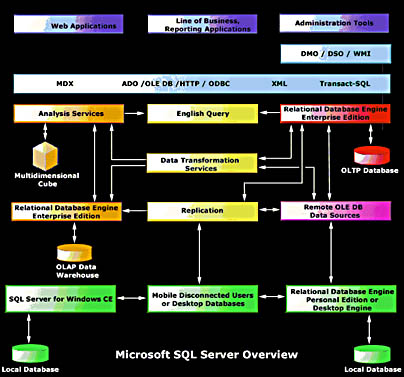 The SQL Server 2000 relational database engine is an RDBMS that manages and stores data in relational tables. Each table represents some object of interest, such as customers, employees, or products. Each table has columns that represent an attribute of the object modeled by the table (such as customer number, customer name, address, and phone number), and rows that represent a single occurrence of the type of object modeled by the table (such as customer number 1374281). The relational database engine relates tables to each other when requested by an application (such as a request for a list of all customers who purchased blue trucks in 1999).

SQL Server 2000 Analysis Services provides tools for analyzing the data stored in data warehouses and data marts on SQL Server 2000. Certain analytical processes, such as getting a summary of the monthly sales by product of all the stores in a region, take a long time if run against all the detail records of an OLTP system. To speed up these types of analytical processes, you can use SQL Server 2000 to periodically summarize and store data from an OLTP system in fact and dimension tables. This storage of summarized data for analysis is called a data warehouse. A subset of this data (such as for a region or a division of a company) is called a data mart. SQL Server 2000 Analysis Services presents the data from these fact and dimension tables as multidimensional cubes that can be analyzed for trends and other information that is important for making informed business decisions. Processing analytical queries on SQL Server 2000 Analysis Services multidimensional cubes is substantially faster than attempting the same queries on the detail data recorded in OLTP databases.

A client application can submit Structured Query Language (SQL) statements to the relational database engine, which returns the results to the client application in the form of a tabular result set. The specific dialect of SQL supported by SQL Server 2000 is called Transact-SQL. Transact-SQL supports the Entry Level of the SQL-92 ANSI standard. Transact-SQL also supports many custom extensions, as well as some features from the Intermediate and Full Levels of SQL-92.

A client application can also submit either Transact-SQL statements or XPath queries and request that the database engine return the results in the form of an Extensible Markup Language (XML) document. XML is an emerging Internet protocol for exchanging information between systems by using self-describing data sets.

SQL Server 2000 provides additional components to support the needs of large enterprises. As a database administrator, you will make use of the first two of these components. Application developers primarily use the last two components.

You can use SQL Server 2000 Data Transformation Services (DTS) to retrieve data from one data source, perform simple or complex transformations on the data (such as summarizing data), and then store it in another data source, such as a SQL Server database or an Analysis Services multidimensional cube. DTS can work with any data source that can be accessed using OLE DB, including SQL Server, Oracle, Informix, DB2 and Microsoft Access databases, Microsoft Excel spreadsheets, and SQL Server multidimensional cubes. Using DTS, you can simplify and automate the process of building and maintaining data warehouses. You can also use DTS for the initial population of an OLTP database.

You can use SQL Server 2000 replication to keep data close to individuals or workgroups in order to optimize performance or autonomy, while at the same time making sure that all copies of the data stored on separate computers are kept synchronized with one another. For example, a regional sales office can maintain the sales data on a local server, and replicate the sales data to a SQL Server 2000 database in the national headquarters. Mobile users using laptop computers or Windows CE devices can disconnect from the network, work throughout the day, and at the end of the day use merge replication to merge their work records back into the main database. You can also use SQL Server 2000 replication to replicate data to a data warehouse, and to replicate data to or from any data source that supports OLE DB access.

SQL Server 2000 English Query provides a system for developing client applications that enable end users to pose questions in English instead of forming a query with a Transact-SQL statement or an XPath query. English Query can be used to access data in OLTP databases or in SQL Server 2000 Analysis Services multidimensional cubes. For example, given a car sales database, an application can send English Query a string containing the question, "How many blue trucks were sold in 1999?"

The application developer specifies database information so that English Query can process English questions about the database's particular tables, fields, objects, and data. For example, English Query must know that a question about customers is related to data in a Customers table. English Query translates a question into a Transact-SQL SELECT statement that is then executed against the SQL Server 2000 database to get the answer.

SQL Server 2000 Meta Data Services is a set of services that allows meta data about databases and client applications to be stored and managed. Meta data is information about the properties of data, such as the type of data in a column (numeric, text, and so on) or the length of a column. In a data warehouse environment, meta data can be information about the design of objects such as multidimensional cubes or dimensions, the quality and lineage of the data in the warehouse, the source and target databases, data transformations, data cleansing, data marts, and OLAP tools.

The SQL Server 2000 Enterprise Edition supports all SQL Server 2000 features. This edition is for medium and large production database servers and scales up and out to support the performance levels required for the large Web sites, enterprise OLTP, and large data warehousing systems (OLAP).

The SQL Server 2000 Standard Edition supports many SQL Server 2000 features, but lacks the features required to scale up and out to support very large databases, data warehouses, and Web sites. This edition is for small workgroups or departments. Relational database engine features not supported on this edition are

This edition is for standalone applications and mobile users requiring local data storage on a client computer. The SQL Server 2000 Personal Edition has a concurrent workload governor that limits the performance of the relational database engine when more than five batches are executed concurrently.

The SQL Server 2000 Windows CE Edition (SQL Server CE) is used as the data store on Windows CE devices. The memory footprint for SQL Server CE is approximately 1 MB. SQL Server CE is implemented as a set of dynamic-link libraries (DLLs) that operate as an OLE DB CE provider. This implementation allows SQL Server CE to support the ActiveX Data Objects for Windows CE (ADOCE) and OLE DB CE APIs in the Windows CE-based versions of Visual Basic and Microsoft Visual C++. Also, it means that multiple applications running at the same time can share a common set of DLLs and save space.

The SQL Server CE connectivity options are well suited for use on wireless networks through networking features such as data compression and messaging to reduce data transmissions, and robust recovery from lost connections.

Table 1.1 sets forth the operating system platforms on which each SQL Server edition may be installed.

Integration with Windows 2000 and Windows NT 4.0

When an instance of SQL Server 2000 is running on any version of Windows 2000 or Windows NT 4.0, the following features and capabilities of these operating systems are leveraged and integrated.

Additionally, security account delegation is supported on an instance of SQL Server 2000 installed on a Windows 2000 computer where Active Directory directory services and Kerberos authentication are available. Security account delegation is the ability to connect to multiple servers, and with each server change, to retain the authentication credentials of the original client.

An instance of SQL Server 2000 running on Windows 2000 or Windows NT 4.0 leverages the security and encryption facilities of these operating systems to implement secure data storage. This includes the option to enable the use of Secure Sockets Layer (SSL) to encrypt all data between client applications and SQL Server 2000.

An instance of SQL Server 2000 Enterprise Edition running on Windows 2000 or Windows NT 4.0 supports failover clustering to provide immediate failover to a backup server with no disruption in operation. Windows 2000 Data Center supports up to four failover nodes.