The ASP.NET Framework represents a significant productivity layer on top of IIS and the ISAPI programming model. If you are familiar with ASP.NET development, you know that it provides the convenience of writing your application logic in a managed language, such as C# or Visual Basic .NET, and working with all productivity-oriented visual designers provided by Microsoft Visual Studio. The ASP.NET Framework also provides many other valuable abstractions that assist developers in areas such as state management, data binding, navigation, and data caching.

Each ASP.NET application can be configured independently by adding a web.config file at its root directory. The web.config file is an XML-based file with configuration elements that control the behavior of various features of the ASP.NET Framework such as compilation, page rendering, and state management. A simple web.config file looks like this:

The page is one of the most valuable abstractions in the ASP.NET Framework. Developers building ASP.NET applications typically construct pages by dragging and dropping server controls onto a visual design surface in Visual Studio and modifying the properties of pages and controls by using standard property sheets. The ASP.NET Framework and Visual Studio also make it relatively simple to add logic to pages by writing managed code that executes in response to page-level and control-level events.

At a physical level, a page in an ASP.NET application is a file with an .aspx extension that resides on the Web server and is compiled into a DLL on demand by the ASP.NET runtime. Consider the following .aspx page definition that contains a server-side control and a simple event handler.

Behind the scenes, the ASP.NET Framework does quite a bit of work to compile an .aspx file into a DLL. First, it must parse the .aspx file to generate a C# (or Visual Basic .NET) source file containing a public class that inherits from the Page class that is defined within the System.Web.UI namespace inside the system.web.dll assembly. When the ASP.NET page parser generates this Page-derived class, it builds a control tree containing all of the server-side controls defined within the page file. The page parser also adds the required code to hook up any event handlers that are defined within the page.

One reason the ASP.NET Framework is so popular has to do with the convenience of server-side controls. It’s very easy to compose pages using out-of-the-box controls that ship with the ASP.NET Framework such as the validation controls, the calendar control, and controls that support data binding, such as the GridView control and the Repeater controls. Furthermore, it’s relatively simple for a developer to author custom controls and use them on pages. 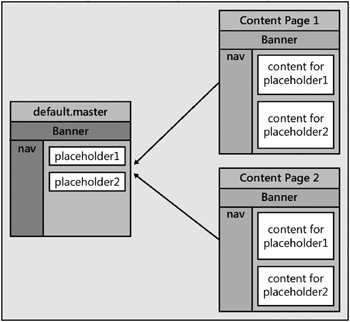 Figure 2-3: A master page defines a common layout and named placeholders that can be replaced within the content pages that link to the master page.

When you want to create a content page, you create an .aspx file and add an @Page directive that contains a MasterPageFile attribute. Once you decide which of the named placeholders from the master page you would like to replace, you then define Content elements for each one. The following is a simple example of a content page that links to the default.master page shown in the preceding code and replaces the content in the placeholder named PlaceHolderMain.

Finally, note that whoever creates a master page decides what the named placeholders will be and which contain default content. This is important when it comes to designing pages for a WSS site because you will be creating content pages that link to master pages created by the WSS team. In this case, you must learn what placeholders the WSS team has defined and what types of content are replaceable.

Underneath the productivity-centered architecture for pages and server-side controls, the ASP.NET Framework exposes the HTTP Request Pipeline for developers who like to work at a lower level. It provides the developer with a degree of control comparable with the ISAPI programming model. However, when you create a component for the HTTP Request Pipeline, you are able to write your code in a managed language such as C# or Visual Basic .NET. You can also use APIs provided by the ASP.NET Framework, which is much easier than using the ISAPI programming model.

Figure 2-4 displays a picture of the HTTP Request Pipeline and its three replaceable component types: HttpHandler, HttpApplication, and HttpModule. As requests come in, they are queued up and assigned to a worker thread that then processes the request by interacting with each of these component types.

Figure 2-4: The HTTP Request Pipeline allows developers to replace components such as HttpHandler, HttpApplication, and HttpModule.

In situations when you don’t want to use a custom HttpApplication component, the ASP.NET Framework initializes the HTTP Request Pipeline with a standard HttpApplication object that provides default behavior. However, you can replace this standard component by creating a file named global.asax and placing it in the root directory of the hosting ASP.NET application. For example, you can create a global.asax that looks like the following:

The third replaceable component type in the HTTP Request Pipeline is the HttpModule. The HttpModule is similar to the HttpApplication component in that it is designed to handle events defined by the HttpApplication class and is processed before control is passed to any HttpHandler classes. For example, you can create a custom HttpModule component to handle request-level events such as BeginRequest, AuthenticateRequest, and AuthorizeRequest. As with the HttpHandler, an HttpModule class is defined with an interface. You can create a class that implements the IHttpModule interface and plug it into the HTTP Request Pipeline by adding configuration elements to the web.config file.

From a timing perspective, it’s important to see that ASP.NET creates this object before any custom code inside the HTTP Request Pipeline has a chance to begin execution. This means that you can always program against the HttpContext object and the child objects that it contains, such as Request, User, and Response. Whenever you are authoring a component that is to execute within the HTTP Request Pipeline, you can write code that looks like the following:

We encourage you to learn as much as you can about ASP.NET 2.0 because it will make you a stronger WSS 3.0 developer. Many advanced ASP.NET techniques are readily available when you are creating solutions for WSS 3.0. The following list presents a few of our favorite titles.