The service object is really a proxy, which will communicate with other objects in the service provider, probably using RMI. The proxy is the part of the service that is visible to clients , but its function will be to pass method calls back to the rest of the objects that form the total implementation of the service. There isn't a standard nomenclature for these server-side implementation objects. I shall refer to them in this book as the service backend objects. 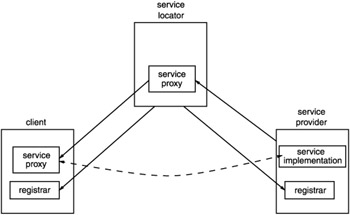 How is the proxy primed? This isn't specified by Jini, and it can be done in many ways. For example, an RMI naming service can be used, such as rmiregistry , where the proxy is given the name of the service. This isn't very common, as RMI proxies can be passed more directly as returned objects from method calls, and these can refer to ordinary RMI server objects or to RMI activable objects. Another option is that the proxy can be implemented without any direct use of RMI and can then use an RMI-exported service or some other protocol altogether, such as FTP, HTTP, or a home-grown protocol. These various possibilities are all illustrated in later chapters.