Implementing an ActiveX control involves a lot of boilerplate code. Look at a basic control's hierarchy and you'll see how much code is necessary for only a bare-bones control. Of course, ATL provides most of that boilerplate code. The basic infrastructure code for most controls is going to be the same from one control to the next, so it makes sense to move most of the standard code to the library.

Once the control is generated, your job is to add the code that makes the control useful. Among other tasks, you'll need to add drawing code, supply properties (and make these properties persist), and develop a set of meaningful events. We'll look at each issue separately, starting with rendering the control.

ATL fills this structure for you. When you're drawing on the screen, the most important fields are the hdcDraw field and the prcBounds field. The other fields are important if you're drawing on a metafile or you need to pay attention to zoom factors and such. The following code shows how the ATL-based message traffic control handles drawing. Notice that when using ATL, you're back to dealing with a raw device context and Graphics Device Interface (GDI) handles.

In ATL, you call your control's FireViewChange function to force a redraw of the control. For example, the message traffic control updates itself at regular intervals by responding to the WM_TIMER message, as shown here:

ATL already provides this redraw functionality. When your control needs to redraw for some reason (either to render on the metafile or to draw on the live screen), the code always ends up in the control's OnDraw code. This means that the metafile is the same rendering as the one that appears on the live screen. If you want to make your snapshot look different, you can examine the device capabilities of the device context to find out if the device context is a metafile (call the GetDeviceCaps API to find this out) and draw accordingly.

Next let's look at what's involved in adding methods to your control.

For example, the ATL-based message traffic monitor should obviously have methods for starting and stopping the control. You can add these functions easily using ClassView. When you add the functions using ClassView, Visual Studio updates your IDL file, your control's header file, and your control's source code (.cpp) file. In this example, calling StartGraph causes the control to install the message hook and start the timer. StopGraph kills the timer and removes the hook procedure. The following code shows the control's IDL and the StartGraph and StopGraph methods:

Making your control's properties persist in ATL involves two steps. First, throw in the ATL implementations of the persistence interfaces you want the client to be able to use. ATL includes the classes IPersistStorageImpl, IPersistStreamInitImpl, and IPersistPropertyBagImpl, which implement the three main COM persistence mechanisms. With these implementations as part of your class, your control's clients can ask the control to persist itself.

Because ActiveX controls are usually user interface gadgets meant to be mixed into much larger applications, they often find their homes in places like Visual Basic forms and MFC form views and dialog boxes. When a control is instantiated, the client code can usually reach into the control and manipulate its properties by exercising interface functions. When an ActiveX control is in design mode, however, it's usually not practical to access the properties through the interfaces. It would be unkind to force tool developers to go through the interface functions just to tweak some properties in the control. Why should the tool vendor have to provide a user interface for managing properties? That's what property pages are for. Property pages are sets of dialog boxes, some of which belong to Visual C++, that are used for manipulating properties. That way, the tool vendors don't have to keep re-creating dialog boxes for tweaking the properties of an ActiveX control.

How Property Pages Are Used

Client code usually accesses property pages in one of two ways. The first is for the client to call IOleObject's DoVerb, passing in the property verb identifier (named OLEIVERB_PROPERTIES and defined as the number -7). The control then shows a dialog frame with all the control's property pages.

The second way for clients to use property pages is for the client to ask the control for a list of property page GUIDs. Then the client calls CoCreateInstance on each property page and installs each in its own frame. Figure 10-3 shows an example of how Visual C++ uses the message traffic control's property sheets in its own property dialog frame. 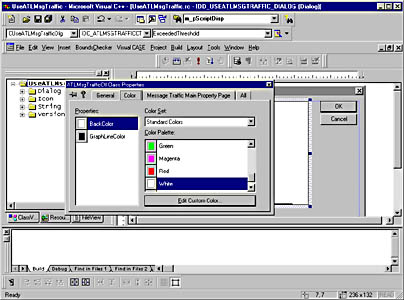