NAS is a specialized server solution with proprietary hardware and software.

NAS products provide a black box style of computer externally configured as a server with extensible internal components configurable to the class of storage requirements you need. The black box computer style is available in both RISC and CISC or Intel processing chip sets. The computer systems hardware is proprietary to the manufacturer in terms of the internal component standardization, assembly, and the lack of interchangeable components .

Figure 9-1 is a generic layout of NAS hardware components. As you can see, they are just like any other server system. They have CPUs built on motherboards that are attached to bus systems. RAM and system cache, meanwhile, are the same with preconfigured capacities , given the file I/O specialization. What we dont see in the underlying system functionality are the levels of storage optimization that have evolved. NAS internal hardware configurations are optimized for I/O, and in particular file I/O. The results of this optimization turns the entire system into one large I/O manager for processing I/O requests on a network. 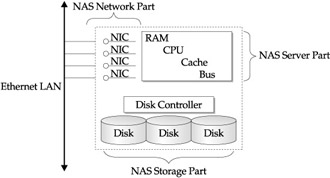 Given the black box orientation of the internal server components means you dont have to worry about further optimization and tuning for file I/O processing for the NAS solution. However, time spent on evaluating the hardware components of the vendors solution is important, because once you install it, further changes will be only up to the manufacturers extensibility of the model. Additionally, all file I/O workloads are not alike, as much as we would like to think so (see Part VI). Given the various and diverse products that exist, the evaluation of the speeds and capacities of the NAS hardware configuration are critical factors contributing to the effective storage and application performance.

Figure 9-1 shows the components that are optimized for file I/O, but does not speak to how they are optimized. This is done in the combination of the internal hardware and the proprietary operating system software as illustrated and discussed later in the software part of this chapter. However, it is important to note that extensive efforts have gone into the design and layout of the NAS internal hardware that provides the optimization for file I/O. It is unlikely we can find out how this is done unless we work for the particular NAS vendor. Needless to say, this work is proprietary to each vendor and is a significant part of the value proposition of their products.

NAS is a storage solution, and as such, perhaps its most important aspect is the storage infrastructure it provides. NAS supports multiple storage types, capacities, and configurations, including select levels of RAID at the top end (for example, enterprise class NAS devices). However, support for RAID levels 1 (mirroring) and 5 (striping with parity) is beginning to become available already preconfigured in low-end NAS appliance devices. Support for incremental storage capacity upgrades depends on the vendor and flexibility of their models for upgrading.

Figure 9-1 is a generic representation of the storage part of the NAS configuration. Note that the proprietary nature of the hardware continues through to the storage connectivity and storage devices. Again, this part of the value proposition of the NAS bundled solution is optimized for I/O operations. There is an important design distinction to point out. Although largely assumed given the traditional I/O operations of the NAS device as a server, it becomes lost in the focus on file I/O operations. The NAS device processes file I/O requests from clients within a network. As with any computer, these are processed into read/write requests through the OS and file system. Ultimately, this results in low-level disk operations performed at a block level, which means the NAS device still performs normal block level I/O operations within its internal processing configuration.

The sophistication of the storage system itself, and how it performs block I/O processing, depends on the type and class of NAS system. However, the storage infrastructure (the storage system, temporary locations, connectivity, and so on) is tightly coupled with the server part as well as the reconfiguration and capacity upgrades that depend on the flexibility of the vendor.

NAS devices are managed differently both internally and from an administrator perspective. The formatting of NAS disk devices is performed under the control of the proprietary operating system and, more importantly, its file system component. Consideration for cluster or block size may be out of the hands of the administrator, and thus limits the flexibility to the types of files the storage system will handle. Monitoring device activity is dependent on the tools provided by the vendor. Although additional third-party tools support limited levels of NAS activities, tools for the internal performance of system, storage, and network parts are lacking.

NAS supports Ethernet-based network connections, with all released standards supported (for example, 100-baseT through Gigabit Ethernet). Connectivity to the server bus is through standard NIC-type connections, however the bus connectivity from the adapter to the system bus is proprietary to the vendor. Most will find PCI connectivity standard even though processing chip sets vary from RISC-based systems to CISC-based Intel systems.

The NIC network components are available from single adapter configurations to extensible configurations that support multiple NIC connections such as those depicted in our generic NAS component diagram, shown in Figure 9-1. The adapters will support standard TCP/IP stacks with most connections being offered by NAS vendors through OEM products from various suppliers. Because of this situation, network performance can vary given the capacities and functionality of the NIC.

Departmental solutions are offered with only single NIC adapters, while mid-range NAS solutions offer multiple connections. However, even network connections for extensible mid-range solutions generally dont exceed a maximum of four NIC adapters. Enterprise NAS solutions will be extensible according to bus structures that are available from the vendor. This NIC connectivity and performance can be a limiting factor in deploying NAS in high growth areas. However, this is generally addressed by adding multiple NAS solutions. (More about these considerations is discussed in Parts V and VI.)